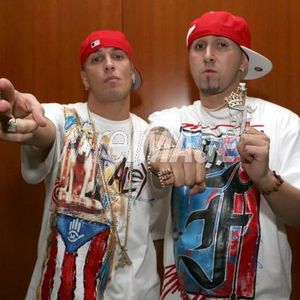 Known for their skillful wordplay and their comedic double entendres, reggaeton duo Alexis y Fido, affectionately known as "Los Pitbulls," may be old dogs in the genre, but they have plenty of new tricks that will make audiences sit down and beg for more. After wooing reggaeton fans with the smash single El Tiburon, featured on Luny Tunes' Mas Flow 2, the hardworking duo is now set to unleash its debut album The Pitbulls, which is promising to make the world bark to a new tune.

After wooing reggaeton fans with the smash single El Tiburon, featured on Luny Tunes' Mas Flow 2, the hardworking duo is now set to unleash its debut album The Pitbulls, which is promising to make the world bark to a new tune.

"I'm very cerebral; I tend to have a lot of concepts, and Alexis has to let me know whether he thinks they can executed," 26-year-old Joel "Fido" Martinez says of his contribution to the duo's chemistry. "I'm much more reserved than Alexis. He's much more animated."

His partner, 26-year-old Raul "Alexis" Ortiz, agrees. "I'm the aggressive one, the one who gets the crowds jumping."


Born in Cidra, Puerto Rico, and raised between the towns of Cidra and Cayey, Alexis first made his mark on the reggaeton scene in 1994, when he appeared on DJ Stefano Vol. 2 alongside two neighborhood friends.

Although he knew music was his calling, he found himself secluded from the genre's pioneers by virtue of living outside of the metropolitan area, the hub of activity at that time. Frustrated by the hardships of gaining recognition, he decided to retire and spent almost five years away from the studio.

"I've been singing since the music was called 'underground,' before it was even named reggaeton," he says. "I started when I was 11 years old. Around the time when Vico C released La Recta Final, I was doing talent shows and performing wherever I could."

But like Alexis, Fido was discouraged by the competitive nature of the developing movement and decided to put his career on pause for a few years. That is, until, he saw the streets' growing interest in the musical form.

"I started getting back into it when people started selling their own cassette tapes in the streets," he recalls. "We'd record our own tapes at home, wrap them in some plastic and sell them on the street."

In 1995, Fido scored an appearance on a DJ Stefano production, followed by a single on DJ Nelson's Little Boys from the Underground 3.

But despite the inroads he'd made, Fido felt overwhelmed by the difficulties before him. He once again decided to withdraw from the scene but, this time, he envisioned a different life for himself, enlisting in the Army and executing a four-year stint.
NBC on iTunes

"I was frustrated again - I felt like we weren't being given the opportunities that we deserved because we weren't from the metropolitan area," Fido says. "Back then, they used to say that Carolina was the reggaeton Mecca."

While Fido was in the military, his good friend Yandel (of the duo Wisin y Yandel) linked up with Wisin during an MC competition in Salinas, Puerto Rico. Their newly established partnership proved fruitful, and they quickly began to raise eyebrows among the genre's frontrunners.
"I've known Yandel since I was in sixth grade," Fido says. "I was the one who told Yandel he needed to start performing. When I came back from the Army and he had teamed up with Wisin, they decided to help me."

Meanwhile, Alexis made his reentry into the genre in the year 2000, appearing in La Mision III with the songs Sigan Perreando and Otra Noche Mas, and in the production Grayskull with the party anthem Manos Arriba. He then appeared in Wisin y Yandel's De Otra Manera and on both Wisin and Yandel's subsequent solo albums.

"I was friends with Wisin," Alexis says. "We used to sing around the neighborhood together, and Fido was always with Yande, so we were all part of the same crew. After Wisin y Yandel got together, Fido and I spent even more time with each other."

Still, the two continued to pursue their own separate paths. It wasn't until the compilation album Desafio that Alexis y Fido tested out their potential as a duo.

"There were 23 tracks recorded already so there was only room for one more track in the production," Alexis says. "One of us was going to be omitted so the producers suggested that we perform together."

Their synergy was palpable and so the two continued to perform together, displaying their skills on songs like Gata Racing off of Blin Blin Vol. 1 and El Palo on El Band 2 Korrupto.

"El Palo was a real turning point in our careers," Alexis says of the song that thrust them into the limelight in 2003. "That was the song that earned us our respect." Fido agrees wholeheartedly, "El Palo would have been as big as Gasolina, but the album wasn't funded appropriately so it wasn't really promoted overseas, but in Puerto Rico it was the No. 1 song for months."

They quickly became known as "Los Pitbulls" because of Alexis' tendency to bark on his records. He introduced the trademark sound early on in his career at Yandel's prompting.

"One time, I went out with my son and Yandel and his son," Alexis says. "When we were on our way home, both kids started getting cranky, and I started making barking noises to make them laugh. Yandel was like, 'How do you do that? You have to put that in your records!' After that, I started using the slogan 'Alexis el Pitbull ladrando' (Alexis the Pitbull barking). "

He says that although the "Pitbull" moniker was initially his, Fido more than deserves to share the title. "I'm the one who barks, but Fido is the one who bites," he jokes.

After years of performing together and amassing a huge fan in Puerto Rico, the duo unleashed their picaresque song El Tiburon on Luny Tunes' Latin Grammy-nominated album Mas Flow 2, which was released earlier this year. The song established them as international superstars.

"People really appreciate our originality," Alexis says. "We have fun concepts and we use la lot of adult humor. The sexual aspect of our lyrics is only evident to adults, and we make sure that we never say anything that could be offensive towards women."

For his part, Fido has earned a name for himself as an accomplished beatmaker. He was responsible for the unique rhythmic patterns Wisin y Yandel's En La Disco Bailoteo and Esta Noche Hay Pelea, and he produced the singles Dale Caliente, El Muro and No Me Dejes Solo on Daddy Yankee's multi-platinum-selling Barrio Fino album.

"I made those songs from beginning to end," Fido says. "Urba y Monserrate did the mixing on those tracks, but I came up with the rhythms."

His production genius is evident in Los Pitbulls through such singles as Eso Ehhh, El Cumbiaton and Tu No Sabes, which he concocted with the help of producer Nesty.

"Sonically, this album has a bit of everything," Alexis says. "El Cumbiaton mixes cumbia with mariachi sounds, Perro Caliente uses beatboxing sounds, Tributo Borincano has a dancehall flavor and Tu no Sabes is a softer ballad-style song."

With such a remarkable pedigree and an insatiable hunger, it's no mystery why Alexis y Fido are known as reggaeton's only pitbulls.