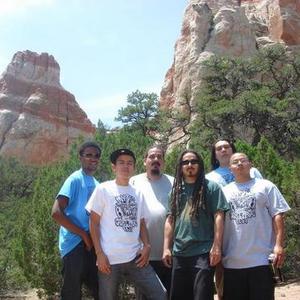 Renegades. Militants. Social Changers. Living Stone is nothing ordinary. Spawned from the fusion of street & reggae in 2000, Living Stone has risen to play with the likes of Morgan Heritage,Midnight, Quinto Sol, Groundation, Tribal Seeds,Rufus Troutman, Christafari, 'Imisi, Priesthood, Propaganda (of The TunnelRats), Red Cloud & DJ Wise. Hailing from Riverside, CA...one might ask, "how can American Reggae offer anything worth listening to?" With Jamaica's SoundSystems leaning towards dancehall music, one must search elsewhere for true roots reggae.

Living Stone is a creative answer-- paying homage to all reggae legends who paved the way before them. The band concentrates on "audio" as well as the "visual", as the LS front man Mario Rocha owns his own clothing label, Living Stone Clothing Co. With each member having the same creative spirit & passion for life, their live performance rivals anyone in the reggae scene. LS has played diverse venues, hitting The Key Club(Hollywood), The Temple Bar(Santa Monica), BB Kings in Hollywood, Joshua Festival 2006 in Northern California & the Whiteriver Apache Reservation in Arizona. Living Stone exudes conscious, positive roots reggae music and that's not all! There's more!?! Their new album "Blood, Sweat & Tears" is a MUST for any reggae enthusiast. With Living Stone appealing to your hears, eyes & mp3 players.... they will be something to reckon with in 2008!

THE NAME: 1 Peter 2:4&5 Coming to Him as to a living stone rejected, indeed by men, but chosen by God and precious, you also as living stones,are being built into a spiritual house, a holy priesthood, to offer up spiritual sacrifices acceptible to God through Jesus Christ.