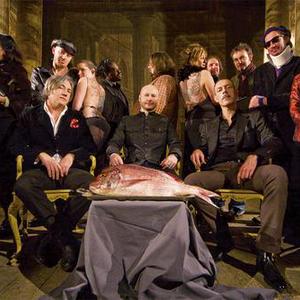 The new project of Live Tropical Fish is born from the fusion of three complementary and symbiotic creative minds: the successful encounter of the original founders Fabrizio ?Doc Bix? Poli and Antonio ?Lurpak? Fern? with the eclectic guitarist-composer Salvo Pignanelli: what was born out of it was a new creative push along with the unconsciousness of jumping into an enterprise that only brave visionaries of music would do.

The ?Fern?, Pignanelli and Poli? trio started a production that soon appeared to be timeless: with a general crisis of record industry going on the goal was to create something that would go against the flow, a ?handmade? album by craftsmen-musicians, exactly like it was done in the 70's, without the harassment of marketing logics or the frenzy of disposable music.

Due to a profound musical concept every guest artist present in the album has been chosen for personal respect, intrinsic value, interpretative originality or just pure congeniality. This is how the Tropical Fish album came to life, by an alchemic process of transformation, combining, assembling, feeding, but with the capability of giving shape to a precise and personal stylistic identity. The primordial power of the rhythmic bases has unavoidably influenced the horns' arrangements created by Adriano Pancaldi, that result at times edgy at times symphonic, always capable of complex and articulated support to melody, at times substituting the tune, at times making it richer.

From afrobeat we borrowed the feeling of a fully played and hard-won music, perfectly identifiable, instrument by instrument, note by note, without ever taking short-cuts, that looks back to what the masters of black music have always done: play live.
After all, the name Live Tropical Fish contains the intention itself, live music has always been the core target of the project: a music that finds in live playing its highest expressive capability, of comunicating and sharing emotions.

The Day Is Too Short To Be Selfish