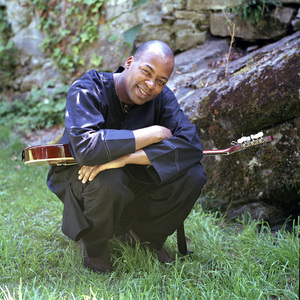 Originally from the small West African nation of Benin, guitarist Lionel Loueke has enjoyed a meteoric rise over the past several years. In 2008 and 2009, he was picked as top Rising Star guitarist in Down Beat magazine's annual Critics Poll. His sophomore release for Blue Note, Mwaliko, follows up 2007's acclaimed Karibu with a series of searching, innovative, intimate duets with Angelique Kidjo, Esperanza Spalding, Richard Bona and Marcus Gilmore. Loueke also includes three new tracks featuring his longtime trio with Massimo Biolcati on bass and Ferenc Nemeth on drums.

Praised by his mentor Herbie Hancock as ?a musical painter,? Loueke combines harmonic sophistication, soaring melody, a deep knowledge of African music, and conventional and extended guitar techniques to create a warm and evocative sound of his own. JazzTimes wrote ?Loueke's lines are smartly formed and deftly executed. His ear-friendly melodicism draws both from traditional African sources and a lifetime of closely studying the likes of Jim Hall and George Benson, and his rhythmic shifts come quickly and packed with surprises.?

Karibu, featuring the trio with Hancock and Wayne Shorter as special guests, won widespread critical praise. TIME called the album ?a jamboree of sprung rhythms, splashed with African and Brazilian flavors, in which Loueke scat-sings, drums on his guitar, mouth-clicks and plays some wicked jazz.? The New York Times declared Loueke ?a startlingly original voice? a spellbinding presence?one of the most striking jazz artists to emerge is some time.?

In addition to Loueke's recordings as a leader and with his collaborative trio project Gilfema, Loueke has appeared on numerous standout recordings such as Terence Blanchard's Grammy-nominated Flow (2005) and Hancock's Grammy-winning River: The Joni Letters (2008). He has also toured the world as a member of Hancock's band and appeared on recordings by such fellow rising stars as trumpeter Avishai Cohen, drummers Francisco Mela and Kendrick Scott, vocalist Gretchen Parlato and more. These experiences all inform Loueke's extraordinary work as a leader.

Mwaliko (pronounced mwah-LEE-koh) is Swahili for ?invitation,? and as Loueke explains, ?you can see the title two ways. One is I'm inviting my friends and fellow musicians to make these duo recordings, and the other is an invitation to all listeners to enjoy the music. What I wanted to do was more of a duo recording with different people, but I also needed the sound of the trio, because those guys are really at the center of my music.? Mwaliko is also buoyed by Loueke's inspired mix of acoustic and electric sound: vocals with layered harmonizer effects, nylon-string guitar with Whammy pedal to create an organ-like sound during solos, and a new custom-made Rolf Spuller guitar that enables him to access low bass tones, filling out the spectrum of sound even in sparse duo contexts.

Having appeared on vocalist Angelique Kidjo's 2007 album Djin Djin, Lionel wanted to reciprocate and feature his good friend and fellow Benin native on a pair of African songs dear to both their hearts. ?We're from the same place and we've known each other for so long,? Lionel says of Kidjo. ?She's got a great sense of rhythm and an incredible voice. It came out in the most natural way, no overdubs or anything like that. We both grew up listening to ?Amio,' it's a standard in Africa, from Cameroon. And ?Vi Ma Yon' is a traditional song from Benin, nobody knows who wrote it. It's a song about how important it is to have kids, that basically if you have a lot of kids, you're rich ? which I don't agree with today!?

Much like Loueke, Richard Bona came from Africa (Cameroon) to take the jazz world by storm, turning heads with his virtuosity on electric bass and vocals. ?I've known Richard for a while now,? says Loueke, ?and he's definitely one of the greatest musicians on the continent. The collaboration worked well because we had a few duo gigs before, and the gigs were great. I wanted to capture those moments.? Bona's lilting, angelic voice is immediately identifiable on ?Wishes,? which Loueke wrote with his friend very much in mind. ??Wishes' has a classical element,? Loueke adds. ?Classical music is a big influence for me, and this really shows it, but of course I'm not a classical player, so I wanted to feature Richard's voice on some of the parts. And I love the way he plays fretless bass.? About ?Hide Life,? the second duet with Bona, which closes the album, Loueke muses: ?It's a song that says sometimes it's better to fight with a smile. It's a happy song. Sometimes you also have to hide yourself to be happy.?

Another fine bassist/vocalist, Esperanza Spalding, joins Loueke for two tracks as well. ?I also played a few gigs with her before, but never duo,? Loueke says. ?I wanted to do this because she has such a strong personality and she's one of the new voices of today.? Spalding puts her stamp on Loueke's ?Twins,? which appeared in a more orchestrated form on the album Gilfema + 2. Reworking the rich clarinet voicings of the earlier version, Loueke and Spalding create a vocal tapestry that's sparse and yet somehow overflowing, full of color and spirit. ?We're both singing and playing at the same time, so with Esperanza too there are no overdubs. She'll sing a line and play a different bass line, which is very hard to do. It came out exactly the way I was hearing. ?Flying,' too, is a new song that I definitely wanted to do with her, with those high notes and that groove.?

With young drumming sensation Marcus Gilmore, Loueke turns his attention to Wayne Shorter's ?Nefertiti.? Gilmore, the grandson of the legendary Roy Haynes, is a member of bands led by Gonzalo Rubalcaba and Vijay Iyer, and is steadily making his way as a leader. ?I've seen Marcus play and I just loved the sound and feel he got from the instrument. Suddenly he's everywhere, for a reason ? such a strong maturity at such a young age. The first time I played with him was in the studio, on this track, ?Nefertiti,' which was a first take. When we finished I said, ?Ok that's it, go home.' There's nothing else to do when it's right!?

The three trio tracks on Mwaliko teem with ?capricious harmonic movement and serpentine grooves,? as The New York Times critic Nate Chinen described a recent trio performance, adding that theirs is ?music of engrossing intimacy and ambition.? Loueke's ?Griot? highlights his richly harmonized vocals and slides easily between the rhythmic vernaculars of Afropop, Brazilian jazz and driving swing.

After his initial to exposure to jazz in Benin, Loueke left to attend the National Institute of Art in nearby Ivory Coast. In 1994 he left Africa to pursue jazz studies at the American School of Modern Music in Paris, then came to the U.S. on a scholarship to Berklee College of Music. It was at Berklee that he first met Biolcati and Nemeth. Through jam sessions, the trio developed an immediate rapport, in part fueled by internationalism. Biolcati is of Italian decent, but grew up in Sweden, while Nemeth was born and raised in Hungary. Both had extensively studied African music and were drawn to Loueke who was just beginning to fuse a Jazz technique with his African roots.

After graduating from Berklee, Loueke was accepted to the Thelonious Monk Institute of Jazz in Los Angeles?along with Biolcati and Nemeth?where he had the opportunity to study his greatest mentors: Herbie Hancock, Wayne Shorter and Terence Blanchard. ?I flipped,? says Hancock, recalling the moment he first heard Loueke's audition tape. ?I'd never heard any guitar player play anything close to what I was hearing from him. There was no territory that was forbidden, and he was fearless!?

Soon after his time at the Monk Institute, Loueke began focusing exclusively on nylon-string acoustic guitar, an instrument on which he's developed a signature voice. ?I feel more connected to the warmth of the nylon-string sound, even if the sound is not completely acoustic,? he says. Indeed, as Loueke's sound grows more uniquely involved, not purely acoustic it still retains those qualities of immediacy, tenderness and passion that have made Loueke an influential force on the world stage, in jazz and beyond.