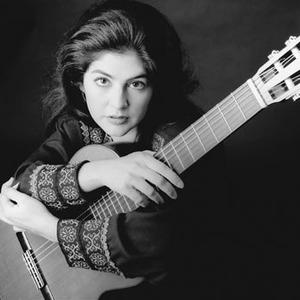 Dr. Lily Afshar's solo, chamber, and concerto appearances combined with her adventurous recordings have earned her the status of ?one of the world's foremost classical guitarists? according to Public Radio International. The Washington Post described her onstage performances as ?remarkable, impeccable.? But perhaps equally as important is her reputation for expanding the contemporary classical guitar repertoire.

Her exciting concert programs continue to earn her an active schedule of solo, chamber and concerto appearances in the US and around the world. Recent highlights include
concerts in the US, England, Ireland, Canada, France, Iran, Jordan, Denmark, Italy, Africa, New Zealand, Australia, and South America. She has performed at the Wigmore Hall in London, the Kennedy Center for Performing Arts, the Grand Teton Music Festival, the Aspen Music Festival, Banff School of Fine Arts, the Menton Music Festival in the South of France, and the American Academy in Rome.

Lily Afshar has four recordings to her credit which have attracted international critical acclaim. Her first recording "24 Caprichos de Goya, Op. 195" was released in 1994 and her second ?A Jug of Wine and Thou? in 1999. Her latest recordings ?Possession? (2002) and ?Hemispheres? (2006) feature a combined total of eight world premieres.
?Hemispheres? reached #7 on Billboard's Top Classical Albums Chart in 2006. Not only has her passion for challenging the traditional guitar repertoire made her a sought after artist by classical composers, it has also led to some unusual guitar sounds. Afshar introduced quarter tones on her latest recording (?Hemispheres?, 2006) which was occasioned by the addition of fretlets to her guitar to accurately reproduce the tones.

?Hemispheres? attracted the attention of National Public Radio's Robert Siegel, who featured Lily on ?All Things Considered? in 2006. Audiences have responded with fascination to the fretlets and to her occasional live performance on the traditional Persian instrument, the setar. At a recent Wigmore Hall Concert in London (where quarter tone pieces were part of the program), England's Musical Opinion Magazine praised Lily for her ?fresh sense of programming? and ?her ability to draw listeners onto the edge of their seats...?

Born in Tehran, Lily was 10 years old when she began learning the guitar. She graduated with a Bachelor of Music and a Master of Music degree in guitar performance from The Boston Conservatory and the New England Conservatory of Music. At Florida State University, Lily became the first woman in the world to gain a Doctorate of Music in guitar performance. She has studied at the Banff Centre for Fine Arts and the Aspen Music Festival. She received Diplomas of Merit from the Accademia Musicale Chigiana in Siena, Italy. She was selected to play for Maestro Andr&eacute;s Segovia in his master classes held at the University of Southern California.


Lily was honored with the 2000 Orville H. Gibson Award for Best Female Classical Guitarist in Los Angeles. Her other performance awards include the Top Prize in the Guitar Foundation of America Competition and Grand Prize in the Aspen Music Festival Guitar Competition, among others. She received the Tennessee Arts Commission Individual Artist Fellowship Award in Music and an NEA Recording Award. She is a three-time winner of the Annual "Premier Guitarist" awards given by the Memphis Chapter of the National Academy of Recording Arts & Sciences and she was chosen as "Artistic Ambassador" for the United States Information Agency to Africa.

Currently, Afshar is head of the University of Memphis guitar program where she received the 2000 Board of Visitors Eminent Faculty Award. Afshar regularly conducts guitar master classes in conjunction with her touring. Her recordings of "24 Caprichos de Goya, Op. 195" by Mario Castelnuovo-Tedesco and "A Jug of Wine and Thou" were released on Summit Records. Her latest recordings, ?Possession? and ?Hemispheres?, were released on Archer Records. Her Five Popular Persian Ballads are published by Mel Bay Editions, Inc.