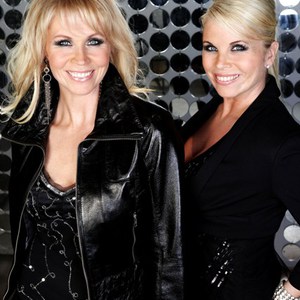 Lili & Susie is a swedish disco duo containing the two sisters Inga-Lill (Lili, born 1966) and Susanne (Susie, born 1964) P?iv?rinta. They were born and raised in Stockholm, Sweden. In 1985 the first single Sommar inatt from their first album Lili & Sussie was released and made them famous in Sweden. After this they planned to promote them selves abroad and released the single Candy Love in 1986, which became a clubhit around the Europe.

But it was in 1987 with the hitsingle Oh Mama they made their big breakthrough and scored number one on the swedish tracklist. Oh Mama was also played a lot at clubs around Europe. Remixes of the song was made to fit both the european and the american market.

Since then they have released other hits during the end of the 80s like: Bara du och jag, Tokyo, We Were Only Dancing and during the beginning of the 90s: What's The Colour Of Love, Evelyn and Boyfriend.

During their whole career they were active for animal rights and as their artistcareer became more inactive after the collectionalbum was released in 1993, the more active became their engagement for animal rights. They tried to make a comeback in 1996, but it was not sucessfull, and in year 2000 after they released a modern remix of Oh Mama, they decided to split the duo for making soloprojects instead.

9 years later they made a sucessful comeback in Melodifestivalen with the song Show Me Heaven and has progressed from heat 2 to the second chance ('andra chansen') round, which takes place on 7 March 2009.

In March 16 2009 Lili & Susie will release a collectionalbum with all their old hits and also "Show Me Heaven".

Many people have wonded about the spelling of the name of the duo. It was in 1990 they changed from Lili & Sussie to Lili & Susie. But actually it was the record company who did that change and according to Susie herself she has always spelled her name with only one "s". So Lili & Susie is the correct spelling!