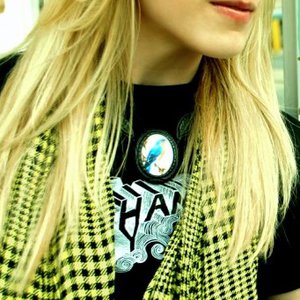 Alexa Wilkinson, a Cherry Hill, New Jersey native, has been influenced by music for as long as she can remember. Born May 15th, 1987, Wilkinson began by playing the trumpet in her school orchestra at the age of 10, and received her first guitar at age 12, picking up the drums, violin, tuba, and the baritone along the way. She took a break from music during her move to Park City, Utah, where she began writing poetry.

She discovered her vocal talent almost by accident when she began turning her poems into song lyrics. At the age of 15, she recorded 3 of these songs, which set her musical career into motion.

Wilkinson began taking guitar instruction from Benjamin Carter and playing at talent shows at her high school, Park City High School, and at her own high school graduation, as well as playing at Deer Valley's Summer Concert Series sponsored by Wells Fargo in July 2005 and July 2006, events that drew crowds of over 3,000 people. At the same time Wilkinson was working with Benjamin Carter on recording an EP entitled Journals Of What You Know. After putting together the 4 song EP, they found another studio in which to start recording a full length album. Carter and Wilkinson collaborated on many songs such as Imperfect, Movie Moment, and Tales of False Advertising. Many of these songs caught the attention of artist Josh Kelley, who in March of 2006 collaborated with and wrote the two songs Giving You Everything and Waterline.

Wilkinson's music found its way to David Pack, whom since June 2006 has helped Wilkinson meet many influential people and help her find gigs in her new home of Los Angeles. In July of 2006, Wilkinson (accompanied by Ben Carter and David Pack) ventured out to Nashville, TN, where she collaborated with Josh Kelley again to produce an 8 song collection of old songs and new. Wilkinson has since been working on expanding her fan base, writing new and more sophisticated material, and booking shows all over California.

Alexa's second album, Lions, was released in April 2008 (available on iTunes). The first single off the album is 'Vanilla Rain' (for which a video has been made). She is also currently touring the US (and predominantly the mid-west).