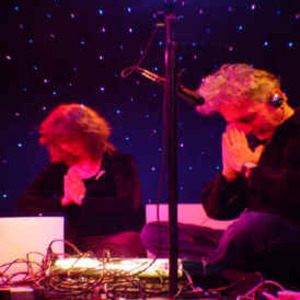 Life In Balance is a Pittsburgh-based nationally touring and recording duo committed to merging sacred musical instruments and current technologies to create a transformative, integrated sonic environments. Two key components of our performances are Sound Healing Meditations which focus on the inbreath, and Dance/Music Concerts through hypno-global rhythms (focusing on the outbreath).

Since 1998, we have been touring consistently - from Anchorage to Key West; from the Delaware beaches to Denver and cities in between. Life In Balance has a strong nation-wide following. May 2010's Long Wow Tour took us across the country from Florida, along the deep South, into Santa Fe and over the Rockies. Finishing in the Midwest, we played and connected with nearly 1000 people during our four-week trek.

For over a decade, we have grown and cultivated our audience and added venues by connecting with liked-minded groups and individuals throughout the country. Our success is measured by the connections we make with the listeners not only our CD sales.

Life In Balance music is heard all over the world. We are in heavy rotation on radio shows and have been featured in the ?Living Room Concert? series on the National Public Radio program ?ECHOES.? Our music has been aired on the syndicated radio show "Music From The Hearts of Space,? as well as many Internet radio stations like Astreaux World and Ambient US.

Life In Balance has composed themes and background music for the International Sculptural Society and dance groups, film/video, and over 20 meditation and healing CDs/DVDs. We have appeared on both local and national television/radio programming performing in hundreds of venues, some big in size others big in spirit. The most important venues are the ones in which telepathy and magic happens, where lasting impressions are made.

Life In Balance defines ?sound? as a relaxation, meditative and healing modality. Our original music synthesis of New Age, Ambient and Electronic; it is a hybridization of these elements with early influences from Fripp and Eno, Kraftwerk, Tangerine Dream and Peter Gabriel.

Life In Balance has also released CDs for the Solitude label, a CD of children's lullaby's for Fisher Price as well as having supplied music for the ?Tracks Across the Universe: Chronology of Ambient & Electronic Music? compilation CD. Life In Balance has been commissioned to write music for several meditation/healing CDs.

Steve built his first synthesizer at the age of 10 and started playing flute at 14. A founding member of the early 1980's progressive group Carsickness (which Trouser Press compared to Van der Graaf Generator) and the Celtic rock band Ploughman's Lunch, Steve is a frequent collaborator with regional and national touring musical groups including Paddy Keenan (Bothy Band), Philip Chevon (The Pogues), Pat Kilbride (The Battlefield Band).
Steve has played support shows for such diverse groups as: U2, Jon Serrie, Red Hot Chile Peppers, Echo and the Bunnymen, Rusted Root and Flaming Lips. Steve's input in the Tri-State regional music and art scene (Ohio, Pennsylvania and West Virginia) has been well-documented over the last 20 years. He has composed and recorded music for over thirty major theater, dance, film and performance art groups.

He has organized numerous musical events though out the Western Pennsylvania region. His solo music has been featured in major Hollywood films and many nationally syndicated radio shows.

Ami Sciulli: Co-Founder, Quartz Crystal Singing Bowls and Percussion.
?I am in resonance with the healing energies when activating the quartz crystal bowls. In so doing, I become a conduit, sonically showering the listeners with the unlimited potential for deep healing, expanded consciousness, enhanced synchronicity and sublime joy. Sounding the quartz crystal bowls with Life In Balance is my destiny.?

?Steve and Ami have been on a mission for years promoting the holistic healing arts of music. They are at the edge and in the center, knocking on the door to the perpendicular universe!?
--Jim Brenholts, ?Tracks Across the Universe: Chronology of Ambient & Electronic Music?

?Life In Balance ?Star? is some good old 21st century positive energy. Star, quite simply, should be in your CD collection. Make it so!"-
--Gordon Danis, AtmoWorks Records

?Life In Balance music is so perfect for ascension. There is an eruption of great spiritual healing that happens while you take your next step in evolution.?
--Sondra Ray, Author, Lecturer, Healer

"I have been using the sounds of ?Star? in several of my workshop because I and the participants feel this is meditative music that creates resonance with the very deepest levels of our souls".
--Dr. Carl Johan Calleman, Author - ?Mayan Calendar?

Pittsburgh City Paper
?...Sciulli's approach has put him at the vanguard of the regional scene. The consistent theme that shows up in his work for the past 16 years is radical innovation.?

From our listeners:
?Life In Balance has been one of the best ways to legally get high - and with many glowing after effects that go on and on and on.?

?WOW! I had never taken meditation seriously and never felt the sounds of life before. Since that evening, I have been able to keep a clearing to receive and listen to all sounds. I purchased your CD that evening and play it when I go to sleep?

?Thank you two for??.the trip into the sonic landscape, where all mind melts back into that one, where all stands still except the pulse of the sound and the motion of the unfolding soul, blossoming into bliss and freedom.?

?Life In Balance is the soundtrack to process of coming home to the peace within. Ami and Steve Sciulli have created music that helps listeners transcend the trivial frustrations of daily life and takes them to a place of peace and harmony.

?I recently went through a heart catherization & gall bladder scan. During both procedures I listened to your CD. The music was my guide and I used it to stay centered, calm and focused. No complications (and best of all no medical problems). Thanks for the good vibes.?

?I must tell you, I have NEVER "felt" music like this. I am totally in love with the feelings your music provoked.?