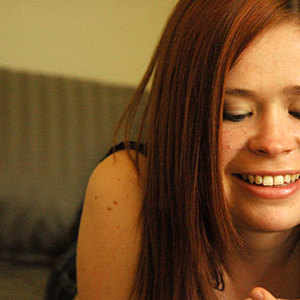 Libbie Schrader first made headlines when her band Think of England won the Pantene Pro-Voice "New Voice of 2001" Competition in New York's Central Park. Schrader and her band beat out over 1,200 other female-fronted acts for the award. Prizes included a nationwide tour with Poe and a demo deal with Atlantic Records. The Atlantic demo is included on the Think of England CD, which is available for purchase on iTunes and at CDBaby.com.

In the summer of 2002, Schrader's band also took part in Jewel's "Soul City Cafe" program for independent artists, and she opened three shows on Jewel's "This Way" tour. Later that year, Schrader and her band were winners of the Volkswagen / Clear Channel Battle of the Bands, and as a result they were invited to open a show for Rusted Root at San Francisco's famed Warfield theatre.

Oregon-raised and Los-Angeles based, Libbie Schrader is now a solo artist with a passionate alt-pop/rock style. Her 2004 release "Letters to Boys" included four tracks produced by Erik Penny, and these tracks were given Music Connection Magazine's highest demo rating of 2004. One of these tracks ("Come When I Call") also received the top review of the week from NPR.org. "Letters to Boys" is now available for purchase on iTunes. In 2005, Libbie released "Taking the Fall," produced by Grammy winner Brian Paturalski (Outkast, Faith Hill). Libbie was recently named as one of Music Connection's "Hot 100 Unsigned Artists" for both 2005 and 2006, and was a MySpace featured artist in early 2006. Look for Libbie on the 2006 Gilmore Girls season finale performing her song "Sweet When You Wanna Be."