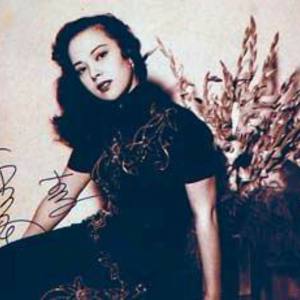 Yoshiko ?taka (?? ?? ?taka Yoshiko?), (English Name: Shirley Yamaguchi) born February 12, 1920 is a China-born Japanese actress and singer who made a career in China, Japan, Hong Kong, and the United States. By the 1940s, she became one of the Seven great singing stars.[1] She was elected as a member of parliament in Japanese Government in 1970's and served for 18 years. Chinese name ??? (Traditional) Chinese name ??? (Simplified) Pinyin L? X?angl?n (Mandarin) Birth name Yoshiko Yamaguchi (?? ??)

Yoshiko made her debut as an actress and singer in the 1938 film Honeymoon Express ????, by Manchuria Film Production. She was billed as Li Xianglan (Chinese: ???; pinyin: L? X?angl?n), pronounced Ri K?ran in Japanese. The adoption of a Chinese stage name was prompted by the Film company's economic and political motives?a Manchurian girl who had command over both the Japanese and Chinese languages was sought after. From this she rose to be a star and Japan-Manchuria Goodwill Ambassadress (????-???). Though in her subsequent films she was almost exclusively billed as Li Xianglan, she indeed appeared in a few as "Yamaguchi Yoshiko". Many of her films bore some degree of promotion of the Japanese national policy (in particular pertaining to the Greater East Asia Co-prosperity Sphere ideology) and can be termed "National Policy Films" (???-??).

The 1940 film Chinese Nights (????) also known as Shanghai Nights (????), by Manchuria Film Productions, is especially controversial. In this film, billed as Li Xianglan, Yoshiko portrayed a young woman of extreme anti-Japanese sentiment who came to fall in love with a Japanese man. A key turning point in the film has the young Chinese woman being slapped by the Japanese man, but instead of hatred, she reacts with gratitude. The film was met with great aversion among the Chinese audience as they believed that the Chinese female character was a sketch of debasement and inferiority. A few years later, when confronted by angry Chinese reporters in Shanghai, Yoshiko apologized and cited as pretext her inexperienced youth at the time of the filmmaking, choosing not to reveal her Japanese identity. Though her Japanese nationality was never divulged in the Chinese media until after the Sino-Japan war, it was brought to light by Japanese press when she performed in Japan under her assumed Chinese name and as the Japan-Manchuria Goodwill Ambassadress.

In 1942, Yoshiko appeared in the film Leaving a good name for posterity (???-??). The film was shot in Shanghai in commemoration to the centennial of the Opium War. A few top Chinese stars in Shanghai also appeared in the film and consequently endured the repercussion of controversy. The film was of anti-British nature and a collaboration between Chinese and Japanese film companies. Nonetheless, its anti-Colonization undertone might also be interpreted as a satire to the Japanese expansion in east Asia. Regardless, the film was a hit and Yoshiko a national sensation. Her film theme songs include jazz/pop-like instrumental, "Candy-peddling song" (???-?) and "Quiting (opium) song" (???) elevated her status to be among the top singers in all Chinese-speaking regions in Asia overnight. Many songs recorded by Yoshiko during her Shanghai period became evergreen classics in Chinese popular music history. Another noteworthy one is Tuberoses (???).
[edit]
Japan, United States, and Hong Kong

At the end of World War II, she was arrested by Chinese government for treason and collaboration with the Japanese. However, she was cleared of all charges since she was not a Chinese national, and thus the Chinese government could not try her for treason. And before long, in 1946, she settled in Japan and launched a new acting career there, under the name Yoshiko Yamaguchi. In the 1950s she established her acting career as Shirley Yamaguchi in Hollywood and on Broadway in the U.S., and appeared in several films made in Hong Kong. She returned to Japan, and after retiring from the world of film in 1958, she appeared as a hostess and anchorwoman on TV talk shows.

In 1969 she became the host of The Three O'Clock You (Sanji no anata) TV show, reporting on Palestine as well as the Vietnam War.

In 1974, she was elected to the House of Councillors (the upper House of the Japanese parliament), where she served for 18 years (three terms). She co-authored the book, Ri Koran, Watashi no Hansei (Half My Life as Ri Koran). She now serves as a Vice-President of the Asian Women's Fund.

?taka was considered by many Chinese to be a spy for the Japanese and a traitor to the Chinese.[2] As noted above, she could not be convicted as a Chinese traitor because she was actually Japanese. This misconception was caused by ?taka's passing of herself off as a Chinese throughout the 1930s and 1940s (hence the Chinese saw her as a traitor, but in fact she was a Japanese war propagandist/actress). ?taka's Japanese identity did not come out until after the war when she had to prove that she was not Chinese to avoid being branded a traitor. ?taka expressed guilt in her portrayal "of a Chinese woman useful for Japanese purpose." She also did not visit China for 20 years or so after the war. She was very uneasy even flying over Beijing and felt that the Chinese had not "forgotten for a moment what you (she) did during the war." She does not feel she is "done making amends."[3]