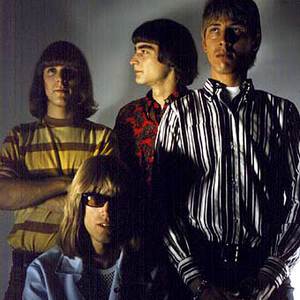 A Swiss '60s band that have sometimes been mistakenly identified as a British group due to their 1968 single "Dream Machine," a quite catchy and enjoyable facsimile of British flower-pop with high harmonies, psychedelic lyrics, and driving guitars. The band had actually been recording since 1965, and established themselves as one of Switzerland's best and most popular groups. That's a status that doesn't confer all that much, Switzerland being a small country, and much of their first LP (1966) was filled with covers of popular rock hits.

These were interpreted, however, with a brash energy that makes the record stand out above the scores of similar cover-oriented albums produced around the globe during the era. "Dream Machine" was a more original effort, and an album from 1968, View to Heaven, also had a more pronounced folk and psychedelic feel than their earliest outings. Les Sauterelles continued recording all the way into the early '70s, and several of their songs (notably "Dream Machine") surfaced on collector-oriented reissues in the 1980s.