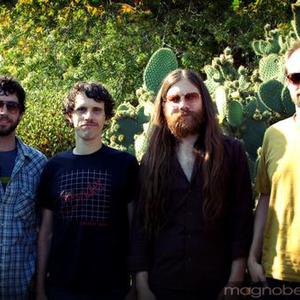 When trademark issues came up over their name, Muso, the Los Angeles-based trio of Joshua Caldwell (vocals, guitar, harmonica, sax, wurlitzer), Parker Todd Brooks (bass) and Brian Soika (drums) looked to documentary filmmaker Les Blank for their new musical moniker. Their first offering as Les Blanks will come out in May in the form of full-length, Shoot The Horse. The group originated in Los Angeles after Caldwell and Brooks (friends who grew up together in Austin, TX), met Soika in 2004.

The group originated in Los Angeles after Caldwell and Brooks (friends who grew up together in Austin, TX), met Soika in 2004. Together they combined their collective love of blues, garage and punk and began playing and touring, including two tours of the southwest in conjunction with appearances at SXSW. Their stop at SXSW last year found them on air with Wayne Coyne (Flaming Lips), who was acting as a field reporter for The Tonight Show with Jay Leno. Seizing the moment, the trio improvised a street performance complete with setting a toy drum kit ablaze. The antics created enough buzz to be picked up by the AP wire, and the New York Posts' Page Six photo spread on SXSW.

In 2006, Les Blanks released their first full-length, Transmute after recording it in a garage in Reseda, CA. Last year, they unleashed the 12" EP Starry, which is for sale through Bomp Records (Brian Jonestown Massacre, Black Lips). Recorded over the course of January 07 through January 08, Shoot The Horse was mostly tracked and mixed at Stanley Recordings in Santa Monica, CA.

Although the band has always been influenced by The Clash and The Stooges, the songs on Shoot the Horse hint at a bigger musical palette. "Starry Tilting Sizzle" recalls a Lonesome Crowded West-era Modest Mouse, while the saloon piano-driven boogie of "La Reina" conjures the hot and dutsy bustle of Los Angeles. Elsewhere, standout tracks can be found on the organ-heavy opener "Grand Kickstand", the country roll of "Ages Old", and the frantic blues harp of "Picture Show."

Les Blanks has taken the DIY looseness of Transmute and combined it with some more professional studio touches to create a truly unique album. In a city where a band of their mixed influences and aggressive approach might get lost among the avant-garde noise rockers and the countless 60's psychedelic folk disciples, Les Blanks is set to stand out.