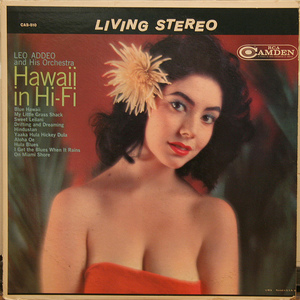 Addeo was one of RCA's key house arrangers for most of the 1950s and 1960s. An Italian American from Brooklyn, Addeo's specialty was Hawaiian music. He studied violin as a child, but switched to clarinet and saxophone in his teens when he noticed these instruments were in greater demand for local dance bands. He gradually moved from performing to arranging, working with Gene Krupa, Larry Clinton, and Frankie Carle.

Hugo Winterhalter hired Addeo as an orchestrator and brought him along when he moved to RCA in the early 1950s. Addeo was a steady producer for RCA, backing vocalists such as Vaughan Monroe and Don Cherry, arranging and conducting on numerous credited and uncredited instrumentals, and writing an occasional song. Addeo held down the marimba band corner for RCA's "Living" series, producing a respectable knock-off of Julius Wechter's Baja Marimba Band.

The Music Goes 'round And 'round (Vinyl)

More Hawaii In Hi-Fi (With His Orchestra) (Vinyl)