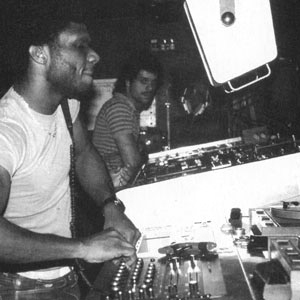 Larry Levan, (born Lawrence Philpott,1954 ? 1992) is best known as a DJ at the Paradise Garage (New York) in the seventies. There he helped forge the house style known as "garage," a mix of disco, soul, gospel and house. Levan's eclectic approach to disco sets and remixes is legendary. He also collaborated in the studio, either as a remixer or, less frequently, as producer with some of the most important artists of the disco era, including Sister Sledge, Chaka Kahn, Patrice Rushen, Salsoul Studios, and Gwen Guthrie.

As well as being an in demand DJ, remixer & Producer he was responsible for two short lived, but original, groups, namely the Peech Boys & Man Friday both unsurprisingly were regulars on the Paradise Garage's turntables.

Larry Levan toured Japan in1992 & shortly after returning home, Levan voluntarily entered the hospital. He died four days later on November 8 of heart failure caused by endocarditis. In September 2004, Levan was inducted into the Dance Music Hall of Fame for his outstanding achievement as a DJ.