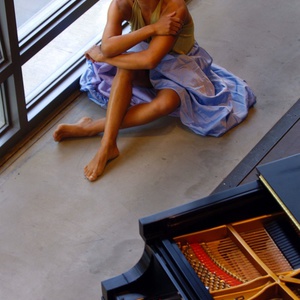 Charmingly personable, intensely musical, and brilliantly virtuosic, pianist Lara Downes is an exceptionally engaging artist dedicated to creating diverse programs that run the gamut of emotions and musical styles from Bach to the Beatles. Trained both in her native California and abroad (Paris Conservatoire; Vienna Hochschule), Lara has performed on the world's most prestigious stages, including Carnegie Hall, Lincoln Center, the Kennedy Center, Queen Elizabeth Hall, the Vienna Konzerthaus and the Salle Gaveau.

Trained both in her native California and abroad (Paris Conservatoire; Vienna Hochschule), Lara has performed on the world's most prestigious stages, including Carnegie Hall, Lincoln Center, the Kennedy Center, Queen Elizabeth Hall, the Vienna Konzerthaus and the Salle Gaveau.

An artist in residence since 2004 at the Mondavi Center for the Performing Arts at UC Davis, Lara also serves as director of UC Davis' ArtsBridge, a university/K-12 arts education partnership. She is the founder and artistic director of the Mondavi Center Young Artists Competition. The young mother of two small children, Lara is strongly committed to introducing classical music to students, presenting a full range of outreach activities ranging from advanced master classes to introductory K-12 programs in conjunction with her concert appearances. Lara works with Grammy in the Schools and VH-1's Save the Music Foundation, to whom she donates a portion of her CD sales and performance fees.

All of Lara's recordings have met with tremendous critical and popular acclaim - her debut CD, "Invitation to the Dance" (Arkadia/Postcard, 2000) was called ?a magical little recording? by National Public Radio ? but it is live in concert that her "unique blend of musicianship and showmanship" (NPR) can be best appreciated. As Lara writes in the liner notes to Invitation to the Dance: "I dance at the piano. I've always played this way, swinging and bopping and grooving with the music, seldom sitting still. It's just the way my body follows the rhythmic pull, the melodic lines...?

Equally passionate about playing works by young, emerging composers as well as finding new ways to explore, understand and interpret the best-loved traditional repertoire, Lara presents her audiences with things that are totally new and takes them on thrilling voyages into territory they thought they already knew. Emerging from a two-year-long Mozart cycle at Mondavi Center, her programs for the coming season highlight her affinity for American music in "Coming Home", a lecture/recital series celebrating distinctly American voices of the 20th century.

Lara currently lives in California with her family. Her all-too-limited free time is spent baking with her kids, fighting her addiction to vintage clothing, practicing Bikram Yoga, and watching 30 Rock.

Lara Downes is a Steinway Artist

Some Of These Days

Holes in the Sky