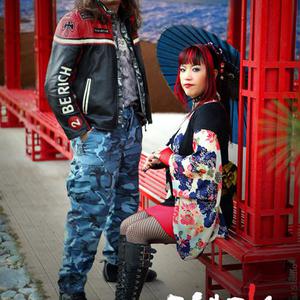 LAMIA CROSS is an artist of 2 composers, Lamia (lyrics & vocal) and Fabrice (guitar). Their music project started in 1996. In the Middle of 1999 they recorded a demo with four songs in Tokyo, Japan. It was fused with the styles of the Gothic/Electro sound. It is on this recording that you can listen to the first sample version of "That Day" which has become "Hiroshima -that day -". But their real carrier in music started in 2004.

As they prepared their first album "Inquisition" Druid (Thierry Margenest) joined as guitarist in October 2004. In December 2004, now known as LAMIA TENEBRAE, they released their 1st album with 8 song titles.

May 2005, brought about a name change for LAMIA TENEBRAE to LAMIA CROSS who has truly found their own style with Chic and Heavy, fusion of sounds Electronic-Metal-Pop-Gothic. In November 2005 the founder and programmer of 98 KUPD (FM radio station in Phoenix, Arizona) Jonathan L. in the United States discovers Lamia on MySpace and begins to play their songs on his radio shows. During more than 7 months consecutive their songs got several airplays. Quickly their songs got another FM radio airplays in Gainsville, California. Then a little later on Bel?m FM in Brazil.
In March 2006 they released their double single "Chic and Heavy". In April 2006, an interview of LAMIA CROSS was played on Pod-Cast Radio in (Arizona).As of May 2006, the songs from "Chic and Heavy" are on sale in digital distribution networks at VirginMega.fr, FnacMusic.com, i-tunes, e-music with more in the works.
Their third single (3 titles)"The Children's World" was released in June on these digital distribution networks. At the end of June 2006, two titles "Hiroshima -that day- " and "if there was No War." was amongst the best sales for a period of time on VirginMega.fr. Under the (French leader of the legal remote loading) in the section Pop/Rock self-production.

In November 2006, for family reasons Druid stopped his activity with the band and LAMIA CROSS set out again with Fab and herself. Their fourth single with (3 titles)"Memory of Rose" was released at the end of November 2006 and a little later, chosen by the city of Boulogne-Billancourt to take part in TELETHON 2006 to bring awareness to the city. This charity event was to raise funds for the medical research of children with rare diseases.

Their song "Merry X'mas to the Streets", the song about homeless peoples got some airplays during December 2006 on 98 KUPD in Phoenix, Arizona which began live streaming on the Internet as well. The song is now on sale on the digital distribution networks.

The song "Enkyoli LenAi" (Long-Distance Love) with Japanese/French lyrics already made buzz on MySpace since the English translation of lyrics has been released and the song got airplays on KUPD in the USA. "Enkyoli LenAi" is available since February on the digital distribution networks. In March 2007, LAMIA CROSS was selected by WILD PALMS MUSIC, their e-label (Digital distributor) as one of 8 bands who play at the annual private party of the e-label on March 13th at LE RESERVOIR in Paris.

In May 2007, LAMIA CROSS played at PARIS ANIME & GAME SHOW (PAG-SHOW), an exhibition dedicated to Japanese anime, mangas, video games and Japanese culture which been held at the Paris-Expo Champerret.

Since July 2007, the video clip of the song "Hiroshima-ce jour la-" is on You Tube and on MySpace. The official permissions are given by Hiroshima Peace Memorial Museum and Asahi-Shimbun company (Japanese journal company) to LAMIA CROSS for using their pictures on this clip to spread the message for the World Peace.

Actually they are preparing some new songs for their up coming album styled with Electronic-Meatl sounds . One of the song called ?Yumeno Nakade ?in my dreams-? got airplay on KUPD in the USA and now the song is on MySpace. And another song ?Yamazakura? is up on Last.fm.