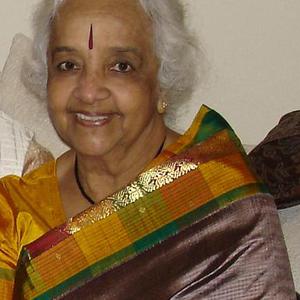 Lakshmi Shankar, one of the foremost and well-known vocalists of India, had her training in the North Indian tradition from Ustad Abdul Rehman Khan of the Patiala Gharana (style or school). Later she learned from many masters including Prof. B.R. Deodhar and also from the sitar Maestro, Pandit Ravi Shankar, whom she assisted in most of his projects for ballets, films, fusions and festivals. The magic of her rich, melodious voice...

The magic of her rich, melodious voice, her sense of proportion and the emotional content of her singing are some of the qualities that have made her one of the foremost and most popular vocalists since the last fifty years.

She is the first Indian classical vocalist who has done pioneering service to popularize vocal music in the west. She has numerous recordings to her credit and has lent her voice to many films, including the Academy Award-winning ?Gandhi' by Sir Richard Attenborough.

She is at present a recipient of the Durfee Foundation (L.A.) to teach Indian music to American students.

Dancing In The Light