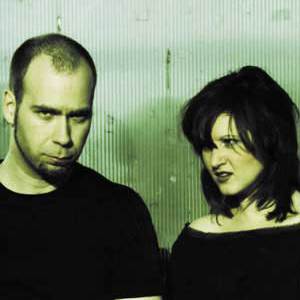 La Floa Maldita gets their name from a term used in South American to describe a nice flower poppy. The poppy described is also the key ingredient for a narcotic that is highly addictive and has the potential to cause death. Coincidentally this term can also be used to describe their music. Their songs start nice and continue to build and change into something more powerful and sometimes lethal.

La Floa Maldita was originally formed in 1992 by the multitalented Guido LeFric. His original intent was to have an outlet to do movie scores. However things quickley changed and Rhea joined bringing her sometimes angelic and sometimes sultry voice to the mix. La Floa Maldita's new style can be described as their own blend of dark dance floor music.

With four full length albums and three EPs behind them, the duo set out to break another barrier when they released the audio/video Salut Jacques. Nearly 5 years in the making, Salut Jacques contains 11 new tracks on the audio disc and 8 full length videos and behind the scenes footage on the DVD.

Reconciled With The Light