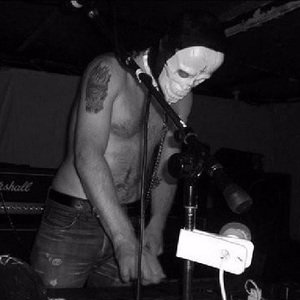 The noise project of Englishman Lea Cummings who currently resides in Glasgow, featuring loud, confrontational Live Aktions which are often brief and invariably culminate in broken microphones and, occasionally, in personal injury. These performances captures the raw, cathartic spontaneity of Cummings' aesthetic superbly. He is also to be found collaborating with Nackt Insecten as KMVSNI, again with Nackt Insecten & WWCat as Temple Of Static Christ and as part of the band Opaque, although he tours extensively under the Kylie moniker.