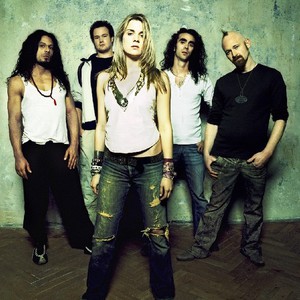 ALEV is translated as "flame" in the Turkish language- and accordingly so, as the band's live show and studio recordings are quite literally, "on fire" with sonic flames that turn the common conventional styles of other bands into nothing more than smoke ALEVs music ranges from Modern Rock, to Alternative Metal while the band's sound is best described as a musical cross between Evanescence and Garbage.

Strong female-fronted rock/metal with emotionally intelligent music and hooks capture the listeners attention and easily keep the songs repeating in their heads, long after they turn off the CD player. Munichs rockband Alev achieved much on their own with their demo-cds Breakable and Broken, before scoring a record deal with SAD Music GmbH in Germany. They rocked to the top of the German alternative charts without large ad campaigns, convincing their fans only with their powerful music and their numerous live gigs. Starting in small clubs and youth houses they eventually went on to play at large festivals, performing at 25 Open Air Festivals throughout Europe in 2004 alone. For 2 years Alev perfectly convinced the audience that they were in fact on fire and now after signing on with Eclipse Records (Mushroomhead, Scum of the Earth, Bobaflex), the bands debut national release entitled We Live In Paradise will be released here in the USA. Alex, the lead singer, singing both powerful rock anthems as well as soft, ballad-like songs with her distinctive voice a voice with an individual touch and an incredible emotional expressiveness that can also be found in the entire band. Alevs music is a tightrope walk, switching from raging, heavy guitar riffs to softer tones while lyrically aiming right for the heart. Combined with Alexs magical attraction, their diversified and emotional live show makes for a truly unique mixture. Catchy refrains, powerful guitar riffs, diversified harmonies, and arrangements beyond conventional clich?s a wild, youthful, and refreshing m?lange full of energy and persuasiveness.