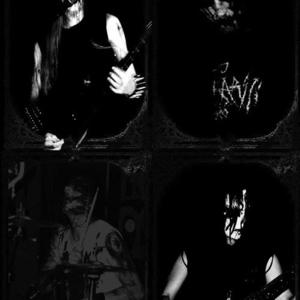 In the year 2004, the form of the band Krvnik was made under the name Vinternatt. It began as an attempt to breed the Darkness by M.K. but soon I.J. and Cadaver were merged into Vinternatt. Within few months, the trinity of Vinternatt composed and recorded a demo tape Moon In Darkness that was self-released in 2006. In 2007, after the depart of Cadaver and gaining J.C., the second demo tape entitled The Dawn Of Abolish, has been recorded during rehersals and later released via Mistress Dance Records from Portugal.

The third release In The Shades of Oblivion has been released in 2008 through Thor's Hammer Productions as a commemoration of the bands past manifestations.

With the time passing, the band decided to purge deeper into the more serious and mysterious depths of Black Metal. In the same year, the band recorded and released an ark filled with putrid and depressive loss of life - ?Echoes. Its containment ended with the result of gaining opportunities to perform live rituals and was the final stab wound for the chapter of Vinternatt.

One year later, after the closed chapter of Vinternatt, the band cleansed itself with a new name ? KRVNIK and formed the unholy Tetragrammaton with the deranged mind of A.D. from Somrak. Stepping towards the praise for glorification of Devil, Doom, Darkness and Death; the self-released full length album Initiation Into The Great Art of Suffering was created and saw the black light in 2010.

For now, the final and utmost gruesome psalm Prophecies So Horrid, was contributed into a split release Covenant Of The Undivine along with their brothers - Somrak, Grimoir and Samomor.

With blood anointed and under the eye of Satan, Krvnik are to continue the paths of all so unsacred...

Initiation Into The Great Art Of Suffering