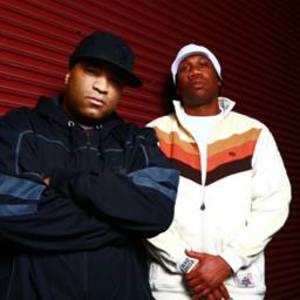 Lawrence Krisna Parker (born August 20, 1965), known as KRS-One, is an American hip hop MC of Nigerian and Jamaican descent. Over his career he has been known by several pseudonyms, including Kris Parker, The Blastmaster and The Teacha. KRS-One is a significant figure in the hip hop community and is often referenced in works by other hip-hop artists and critics as being the "essence" of an MC and among the greatest rappers to hold the mic.

Marlon Williams (born September 30, 1962 in Queens, New York City), better known as Marley Marl, is an influential hip-hop producer. He was the house producer of the Juice Crew, which included (in addition to him): Big Daddy Kane, Biz Markie, Roxanne Shant&eacute;, Kool G Rap, MC Shan (his cousin) and Masta Ace, and produced songs for outside artists including King Tee and LL Cool J. He was also an important figure in the careers of Eric B. & Rakim, producing their first hits "My Melody" and "Eric B Is President", mixing James Brown samples and synthetic beats in a fashion previously unheard of.

Hip-Hop Lives is a collaborative album from MC KRS-One and producer Marley Marl that was released on May 22, 2007. The album is sometimes consdered a bench mark in the history of hip-hop, in the sense that 20 years ago, KRS and Marl were once bitter rivals involved in the legendary Bridge Wars.

"It all happened with one phone call," Marley Marl told AllHipHop.com during a March 2006 interview.[1] "They called me and he jumped on the phone and told me it would be spectacular for Hip-Hop...My reason for doing this is to show these kids that [Hip-Hop beefs] are not that serious."

Album sampler has premier on HipHopGame.com

This album was ranked #1 Top Hip-Hop releases for May on About.com