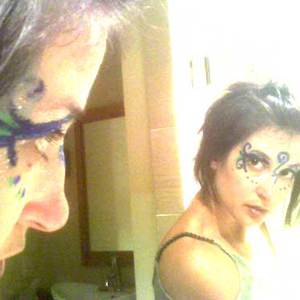 As a songwriter, she draws inspiration from old-time a cappella singing styles for songs like ?Crayola Doesn't Make a Color for Your Eyes? & ?Easy in the Early? (John Lennon Song Contest 2007 Grand Prize for children's music & Finalist for gospel). Also included on her independent solo release Kiss Me Hello are a collection of colorfully orchestrated acoustic pop tunes ? with a dash of musical theater thrown in for smiles.

Kristin's mentors include heroes of the acoustic scene (Nickel Creek bassist Mark Schatz produced her solo album), as well as the rock & pop world (Led Zeppelin's John Paul Jones produced the current Uncle Earl release). She's equally at home at Clifftop (a West Virginia fiddlers convention with one tiny stage & a lot of camping tents) and at Bonnaroo (the country's largest rock festival, where she played in '07 & '08 with Uncle Earl & then with Sometymes Why).