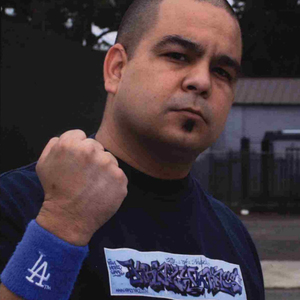 Moving in at the speed of sound. The world is moving at an average of 1,040 mile per hour, in the city of Los Angeles that speed is ten times as fast for young street athletes trying to outrun the obstacles stacked against them. To survive the warped spin of the hustler's life you must be trained and focused to think, speak, and react like a lightning bolt. The RACE is for your life and the KRAZIER you are; the better.

KRAZY RACE, born Markie Ramirez, Has been able to survive the darkness and give that darkness a beat deep enough to reverberate through the cement of the streets he's still pounding into the promise lands. although the speed of his race can only be compared to the acceleration of his delivery on the mic, KRAZY RACE is a man who knows it takes time to build a successful sound not limited to regional politics or gang labels.

KRAZY RACE has caught the eye of the media and has been on FOX, UPN, and LATVs THE HIP-HOP SHOW & MUN2 Off The Roof & The Roof and EASTSIDE PRIMETIME on the Adelphia network, SITV's "THE DROP", ABC's "Latin Nation", and "L.A. Onda" on LATV.
Also been on "Cruzin TV" & The 420 Live Show on Vlaze.com.

KRAZY RACE can also be found on LA's airwaves laying down drops for today's most highly rated hip-hop broadcasts! There are no limits or labels fit to dress KRAZY RACE up in. He wears his styles as loosely as his pants, delving into the mixes most WEST COAST rappers would run from. He is an every man's lyricist, from living the high life on joints like HYDROPONIC DREAMS to CHASING THE BLUES AWAY, to battling the POWERS that be on NEW WORLD GAMES or ILLUMINATI or cruising the city blocks to hits like CITY OF ANGELS or DEDICATED, Krazy Race is set at a pace that leaves everyone pumped and proud of this emcee who survived the game long enough to bring home his own piece of musical fame...
THE SAGA CONTINUES...

Chronicles Of A Krazy Race