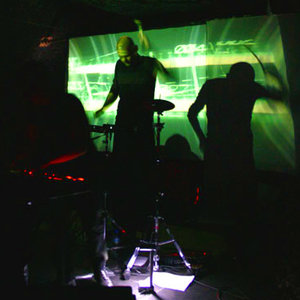 KOM-INTERN is a French experimental industrial act which fuses different genre styles of Dark Ambient, Glitch, Rhythmic Noise and such to create a unique and hypnotic music which one can follow like a soundtrack to a film. Their first release dates back to 2001 with the title Order 937 having a rather powerful approach to the somewhat subtle style of almost militaristic sounding electronic music. Having released four main albums since (not including the .mp3 release "Nagasaki Garden",) the band has touched a very personal sound which can range from scraping noise to paranoid ambient beats.

KOM-INTERN's latest product: "Soviet Alien" on Hands records, based on the paranoid atmosphere in the US during the Cold War - full of aliens, encounters of the third type and UFOs being a metaphor of the USSR or Communist invasion.