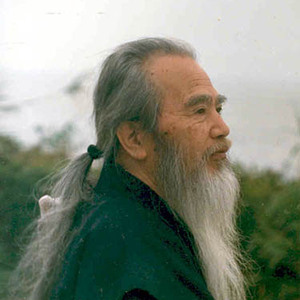 Koku Nishimura started playing the bamboo flute when he was 28 years old. He was taught by a "komuso" named Kyochiku Tani. Later, Koku Nishimura became a master flutist and founded the Tani-sect of flute players. He named the special type of bamboo flute used by himself and his pupils, "kyotaku." Koku Nishimura became a komuso and for ten years he walked around Japan and played kyotaku. He tought students from all over the world, and he has made over 2,000 kyotaku flutes. In addition to being a flute master, he was an accomplished woodcarver and painter.