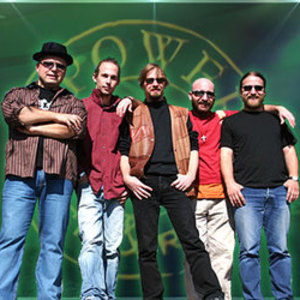 2. Knock Out is a rockband that was founded in 1993 by Yogi J?zsef L?n?rd and S?ndor Varga both ex-members of Compact Cluj. They were joined by Axl Ferenc Szab? (bass guitar) who was replaced later by ?-csi Istv?n Nov?k.

Their first album Mit hoz a holnap? (What's tomorrow bringing?) was recorded at the Taurus Studio in Cluj-Napoca and edited first by Mirexim, then by Dancs Market. The trio accepted many invitations received from Transilvania and Hungary. The most important concerts that took place out of the country were Rock Krist?ly D?j Budapest '94 (where they got into the final), Eurowoodstock Budapest Di?ksziget '94, Rockt?ber B?k?scsaba '96. In this period the band joined Moby-Dick, Hobo Blues Band and Edda Muvek on their Transilvanian tours.

After the anniversary concert in 1998 the drummer S?ndor Varga decided to establish in Hungary. He was replaced in 1999 by Cristian Varga who brought along with him one of his ex-colleagues, the bass guitar Gy?rgy Mikl?s.

In May 1999 the band withdrew into the studio and recorded its second album called M?sodik ki?t?s (The second elimination). It appeared in September edited by Dancs Market Records: 10 songs on audio cassette and 12 on CD. Besides the Kolozsv?ri v?ndor (The traveller from Cluj), T?vcs?vem (My telescope), V?rig Blues (Blues till blood) and Nincsen hib?d (You've got no flaws), the public also goes crazy about Nektek (For you) that was taken over from Metropol. After the album got on the market a number of superconcertes were organized in Cluj-Napoca, T?rgu-Mures, Sf?ntu-Gheorghe, T?rgu-Secuiesc, Miercurea Ciuc and Odorheiu Secuiesc. The record was acknowleged both by the Transilvanian and the Hungarian media. At its promotory concerts was already present the quitar player Gula Oliv?r V?gh who has also been an exceptional sound engineer.

In the springtime of 2000 Knock Out was the lead band at the Rocktoborz? Festival organized by Radio and Televison of Cluj. In the meantime the drummer Cristian Varga opened his own audiomastering studio. That took more and more of his time therefore he was replaced by G?bor Gindele.

?You ought to be a hell of a rockband to sing in Hungarian in Romania and to get to the third album?. With these words announced Csaba Zilahi, the ?media supporter? of the band the appearence of the album A 3. Menet (The 3rd Round) on the music pages of the Kr?nika newspaper in November 2002. The songs were recorded at the Glas Transilvan Studio in Cluj-Napoca and appeared on the market thanks to the Euro Music publishing house. The brand new Knock Out-songs S?rnapok (The days of the beer), AC ko DC (AC ko DC), Ahol a Motorosok (Where the Motorcyclists) and Megl?pett Piroska (Little Red Riding Hood wipped off) were presented at the beginning of 2003 in the Romanian towns inhabited mostly by Hungarians.

In December 2003 was offered for sale the selection album Arany?v (The Golden Belt) which contained 13 reinstrumeted songs and was edited by Euro Music.

Because of the recordings and the continuous concerts The 10 Years' Jubilee Concert of Knock Out was postponed until February 28th, 2004. This took place in the Concert Hall of Radio Cluj and it also was the promotory concert of the Arany?v album.

In 15th March, 2005 the band performed at the Tranzit House in Cluj-Napoca. Here appereared for the first time alongside of the band the violonist and keyboard player Attila P?ter.

In May the band participates at the charity concert in Satu-Mare organized for the victims of flood from Timis county. In December they organize the Santa Rock-Claus Concert where they present their brand new songs: J? reggelt, Erd?ly (Good morning, Transilvania) and Engedd, hogy ?rezzem (Let me feel) letting this way everyone know that the band has begun the work for the fifth Knock Out-album.

In 2006 the history of K.O. will continue successfully!