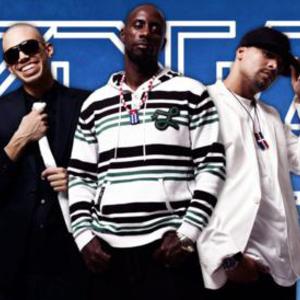 3 rappers, 3 nationalities, 1 team = KNA Connected. KNA Connected consists of Kahlil, Big Naimi and AG with roots in USA, Cuba and the Dominican Republic. With 3 different cultures KNA Connected has proven that you can be connected despite nationality and language. The common denominator for KNA Connected's music is hip hop with a twist; from the latino to worldwide music influences. Their musical universe is inspired by multi-cultural music.

The group has worked with musicians from China, USA, Cuba, Japan, Denmark and Spain. They met on the basketball courts through a common love for the game, and they continued the cooperation through hip hop music. The base of the band is Copenhagen, Denmark.

The album title is Uno which means 1, we stand together as one family. KNA Connected get their inspiration for their lyrics from their upbringing, girlfriends, friendships, fun experiences, and togetherness. On the album Uno you can hear tracks like: China - KNA Connected heard a Chinese girl playing the Chinese Erhu (string instrument). The band fell for the sound and invited Winnie to visit the studio. In the intro of the song Winnie says "I don't understand English, Spanish or French, but it doesn't matter because I can see everything in your eyes". Another example of KNA Connecteds musicality can be heard in the track called Fibs. For this track the guys thought it would be charming to have a little childs voice on the track and a Danish-American girl of 6 was invited to a session in the studio. The song is about lying to make your life seem better. Ironically children are experts at spotting such a type. Back When I Was is about the days when KNA Connected were kids. Remembering the childhood years you always seem to think about the good things even though there were plenty of bad times. Other titles on the album: Difficult, Friendship, Beef, Western, Lies, Ah Ah Ah, Only, Revolution, Ella.

Back When I Was