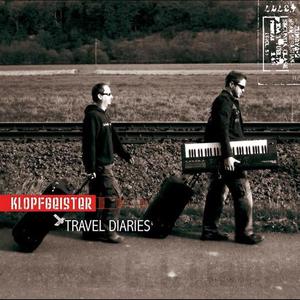 In 2002 Jens Schefzig and Thorsten Paul met on a party and Jens told him that he has some Music-Equipment at home and Thorsten said, that he was able to play some instruments. So the Project KLOPFGEISTER was founded by accident. After lots of fun home sessions they played their first gig accidentally again, when Thorsten ( DJ Pauli) didn't have enough new Records for a DJ Gig, he asked Jens to go on stage with the Synthisizer.

They were backed-up by a Guitar-player and singer, a Keyboarder, a drummer and a girl on a violin. They improvised about 3 hours and after that, they had 4 more Bookings. Through many Live Acts which followed in the next years all around Europe, they got some new influences for the studio and especially Jens worked on his technical skills, whilst Thorsten used his DJ Experiences and his Classic-Piano Education ( 10 years) to work on songwriting, producing and arranging. Their first release was in 2004 on Mental Arts and the Track "How to become a psychic" is a massive Dancefloor Burner until today. In 2005 they were asked from the famous Psy-Label "Balloonia" if they want to release a whole Album there. So in May 2005 the Album "Sweet Compromise" came out and got attention worldwide because of its melodic, emotional, progressive but also psychedelic approach.Due to the crash of "Cosmophilia Distribution", Balloonia Records and many other independent labels had to quit and so KLOPFGEISTER had to look for a new label.

Meanwhile they provideda lots of tracks and remixes for free download on their homepage www.klopfgeister.com and released many other tracks on compilations (YSE, Mental Arts, Iono Music, etc..) A new album is OUT NOW (November 2006)on IONO MUSIC and they also are working on an Double Album (1. Disc: Dance-music, 2. Disc: Ambient and Downtempo-Grooves). But that's not enough and so they prepare a LIVE Album at the moment and work for the German TV on Soundtracks for Documentaries and Jingles for Radio stations and Homepages.Thorsten also studies music, media and art at the Marburg (GER) University. Until now they are well known for their very special Live Acts and the fact that the play nearly 100 % real live makes every gig a very special experience for the audience. The people want a break? They get a break! Everything you hear (Rhythms, Melodies, Synthies, Arpeggiators, Guitars,Vocals) is created and performed in realtime. So please excuse that they may be some more mistakes which depends on that KLOPFGEISTER don't use MIDI or HarddiskJ Their sound changed a bit within the years and now they can offer a full range of musical styles. From powerful rocking Nightsound to emotional progressive Morningsound and Ambient - just like the Party and the time needs it. At the moment its mostly only Thorsten and Jens who are doing the Live performances, but if they were booked as a band they take the "real" musicians" with them, depending on the size of the Concert and what the Organizer wants and needs.