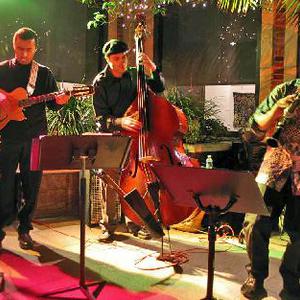 While many of us associate klezmer music with European immigration to the United States , Jews at the turn of the century were settling all parts of the Americas , and they and their descendents have a rich history in Mexico , Argentina , Brazil , and many other Latin American countries. Klezmer Juice bandleader and clarinet player Gustavo Bulgach was born and raised in one such community in Buenos Aires, Argentina.

A part of the large and active Jewish community there, he learned Klezmer music from his family at a young age. Inspired by the religious and secular life of the Argentine community, Bulgach, who now lives in Los Angeles , has traveled around the globe, finding that Klezmer music is the ?soundtrack of the Diaspora.? While remaining true to klezmer's Eastern European Jewish roots, Bulgach's Latin background and hipster credentials have also led to a busy career performing with other internationally-acclaimed acts.
Also, he has performed with Yusef Lateef, Adam Rudolph, Chris Botti and with the legendary Bernie Maupin.

Klezmer Juice has an ever-growing fanbase in Los Angeles, and wasthe house band for the Simon Wiesenthal Museum of Tolerance is the new generation of Jewish Soul musicians, torchbearers of an ancient traditional craft that unites generations in spirit.

Fresh interpretations of traditional tunes, such as "Cigarettes?, ?Ot Azoi?, ?Zemer Atik?, ?Eli Eli?, ?Donna Donna? among others, captures the heart of a new generation of fans. Being an international young mix of 30 years average age, the band adds the original and soulful sound of the traditional Klezmer Clarinet, that "laughing-Crying Yiddish soul".

In July 2005, the legendary Hollywood Bowl booked Klezmer Juice to lead a weeklong educational series (which sold-out) in which they played for the audiences and taught them the roots and evolution of Klezmer music.