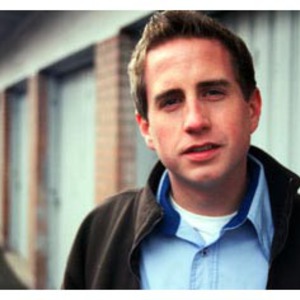 "I started playing the guitar when I was 15. My friends and I had just discovered the Beatles the year before and were figuring out ?Let it Be? on the piano. Since there were 3 of us, only one could play the piano at a time. If we were to play together, someone had to bring in a new instrument. I found an old guitar at my house and played around with it. I went to a music store to buy a ?How-to? book and found a Beatles songbook. It had all their songs with the chord charts and fingerings above the lyrics. I learned to play guitar (and every song) from that book.

After being introduced to the guitar by the Beatles, I searched for new and challenging songs. I learned a lot of standards. Yes, even ?Stairway to Heaven.? After 3 months of learning new chords and other people's songs, I decided to start writing my own. By the end of my 9th grade year, I was performing my original songs, along with plenty of Beatles covers, at my friend Tyler Bastian's house. We would do shows in his greenhouse in Draper, Utah. I found an old home video of one of the concerts, and I was surprised that so many people came.

When I was a sophomore, I recorded a short album called ?Pennies for the Player? with a 4-track mixer, a microphone hanging from a ceiling fan in this kid's bedroom, and another microphone taped to my guitar. We made 50 copies and sold them all. That year, I kept writing new songs and performing at Tyler's.

In the fall of 1993, I was an avid follower of the band ?Ali Ali Oxen Free.? They would play in Provo, Utah, at a place called Pier 54. I don't remember how it happened exactly, but something that Tyler said to the band lead to me playing a few songs during their break. I met Steve Lemmon, the guitarist and singer, and we recorded a ?bigger and better? album in his studio, Spiral Studios, during the early spring months of 1994.

After recording the album ?Looking for Tomorrow,? I hooked up with the coolest, long-haired, chick-magnet-artist, Marc Thorup. He was a wizard on the guitar. He had a band called u4ea and they had been playing together for a long time. I had been an acquaintance of Marc's since 6th grade. Through a common friend, I was reintroduced to him and we hit it off both musically and as friends. He invited me to join in a jam session with his band. It was the most amazing thing: 5 musicians playing the same song together. After playing a few covers, I whipped out some of my original stuff, hoping that Marc would be impressed that I was retuning my guitar to DADGAD tuning. I was in heaven (once everyone knew the chords) because we were all playing one of my songs!

I sort of invited myself to be a part of the band and we started playing all over the Salt Lake and Utah County areas. We changed the name of the band to ?Shasta Daisy? and recorded a great album, ?Alaska? in early spring, 1995 at Spiral Studios. We kept playing right up to the time I went on a mission for the Church of Jesus Christ of Latter-Day Saints in October of 1995.

Marc and I wrote to each other frequently. We would send new songs and lyrics. After the two years, Marc and I got back together, renamed the band to ?Bentleigh? (a combination of our middle names), and invited 3 new members to join. We played all over the state of Utah. In 1999, we recorded an LP. Marc and I would open as an acoustic duo for various artists like Peter Breinholt and Ryan Shupe and the Rubber Band.

During the 2002 Salt Lake Olympic Winter Games, Bentleigh performed at various events and parties and opened for N'SYNC at the Olympic Medals Plaza.

During this time, I had just graduated from the University of Utah and signed with an agent for acting. Soon after signing with the agent, I was fortunate to be cast in my first feature film. I had to cut back on performances with the band. After a few months, the band went their separate ways. I continued acting in different projects and writing songs at home.

After filming the R.M., I let the producers know that I was also a ?practicing musician.? They asked me to cover a hymn for the soundtrack. I picked my favorite, ?If You Could Hie to Kolob.? They then asked me to cover a song for their upcoming Christmas album. I chose ?I Believe in Santa Claus.?

At the end of 2002, an actor friend of mine, Will Swenson, sent me an email with a script about a boy band. In 2003, we recorded a pop album and filmed a ?making of the band? mockumentary called ?Sons of Provo.?

A song of mine from the ?Sons of Provo? soundtrack, ?Beautiful Inside,? caught the attention of filmmaker Christian Vuissa. Christian and I had met earlier that year during pre-production of his film ?Baptists at Our Barbecue.? We hit it off as friends and talked of working together. We recorded the album ?Inside? during December of 2004.

Everyone has music. How we shape it and emote it is what makes us unique.

Music is an easy thing to love."

Merry White Tree in the Night