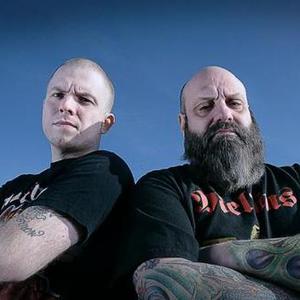 Boasting a line up that includes members of such influential metal bands as Hatebreed, Down, Crowbar, and more, Kingdom of Sorrow has arrived to stake its claim as the band that lives up to its super group status. The seeds of Kingdom of Sorrow were sown over a decade ago when a 16 year old Hatebreed front man (and avid Crowbar fan) Jamey Jasta introduced himself to Down / Crowbar guitarist Kirk Windstein at a show at Pearl Street in Northampton, Massachusetts.

The seeds of Kingdom of Sorrow were sown over a decade ago when a 16 year old Hatebreed front man (and avid Crowbar fan) Jamey Jasta introduced himself to Down / Crowbar guitarist Kirk Windstein at a show at Pearl Street in Northampton, Massachusetts.

A short time later Jasta, who actively booked shows throughout New England in the early nineties, put up the cash for an Napalm Death / Crowbar show in order that Hatebreed could play with one of his favorite bands. Ever since, the two have remained in close contact and become the best of friends over the subsequent decade.

Jasta and Hatebreed invited Crowbar out for a UK run of dates in March 2005. It was there that the two friends decided to combine forces on a band based on their mutual affinity for the hallmarks of the genre (Black Sabbath, Iron Maiden, Pantera) and their history of writing some of the heaviest hitting metal of the past fifteen years.

The duo holed-up in Silver Bullet Studios in Connecticut in May 2005 and once again when Kirk relocated post-Katrina to write and assemble what would become the very first Kingdom of Sorrow album. The first taste of the untitled project surfaced in the form of the epic track ?Buried in Black? on Roadrunner Records,'MTV2 Headbangers Ball: The Revenge' compilation (released April 2006).

?Buried in Black? combined two of metal's most recognizable styles into one crushing, morose display of metal brilliance. The lead-heavy riffs captured by Zeuss (Hatebreed, Shadows Fall, Municipal Waste) that closed the compilation cleared the deck of the bands before it, and were a call to arms of what is sure to be one of the genre's most celebrated new bands. It wasn't long before ?Buried in Black? appeared on metal radio shows the world over and became a staple on Sirius' ?Hard Attack?.

While the writing flowed fast, progress was slow due to the pair's commitments to their main bands that wrote, released, and toured extensively, on new records through 2006 and 2007. Songs were deconstructed, reconstructed, written and recorded again in Planet Z Studios (Hatebreed, Shadows Fall, Killswitch Engage, etc.) with Zeuss until the duo was completely satisfied with the outcome. Jasta commented on the writing process, ?It really was probably the best time I've ever had in the studio. As far as creatively...it was such a liberating thing. We felt like, "It's a new band. It doesn't matter what anybody thinks." We're just doing it because we want to do it. So it was a totally genuine and pure creative process."

Kingdom Of Sorrow inked a deal with Relapse Records in fall 2007 and began plans to unveil the record they'd spent the better part of two years creating.

On their long-awaited debut album Kingdom Of Sorrow (due February 19 in North America, February 25th internationally) lays down an 11 track barrage of some of the heaviest and most muscular metal in years. Tracks such as "Lead into Demise", "Demon Eyes (Demonized)", "Lead the Ghosts Astray" are as memorable as they are heavy, while the haunting "Screaming At the Sky" and ?Free the Fallen? show a new side to these often-copied, yet never duplicated metal luminaries. Kingdom Of Sorrow is the incredible next step in the illustrious careers of two of metal's most-celebrated heavyweights.

In early 2008, Jasta and Windstein assembled the first full lineup for the bands upcoming live debut. In addition to Jasta (Vocals) and Windstein (Guitar, Vocals), Kingdom Of Sorrow is completed by former Black Label Society guitarist Steve Gibb, Seemless drummer Derek Kerswell, and bassist Matthew Brunson. The quintet will step out on its first dates on a short Northeast US Tour in March, before announcing world tour plans for the coming months.

Behind The Blackest Tears

Behind The Blackest Tears (Deluxe Edition)