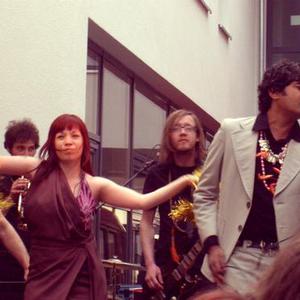 Who is this maniac Master of Ceremonies who openly confesses to the two grand black bohemians said to be lunatic Sun Ra and George Clinton, and whose stagings certainly remind us of a young Herman Sonny Blount and his Solar Arkestra? In 1995 Khan leaves the frosty soil of the city of Montreal playing the bass for the International-Underground-Legends The Spaceshits. The band is produced by Mike Mariconda with a special guest appearance from the Fabulous Andy G (devil dogs). Khan founds the secret lodge of the KUKAMONGAS.

During the oncoming years Khan tours across the States. Detroit, New Orleans, New York City, LA, San Francisco, Dallas, Tijuana etc. Khan doesn't return from the first Spaceshits-Europe-Tour in summer of 1999. In Germany the young 22-year old Canadian founds a Psychedlic-Soul-Big-Band THE SENSATIONAL SHRINES. The first line-up includes Ron Streeter (live-percussionist of Curtis Mayfield, Stevie Wonder, Al Jarreau and other Soul-Legends), as well as a horn section of rowdy teenagers, and a rhythm section which can only be called a german/french version of the Freak Brothers. Khan meets Fredovitch (Bordeaux's wildest organ player) wearing a silver-studded gogo dress, matching cowboy hat and sporting a full beard. He dubs him into shrinehood only one week before recording their first album in Toe Rag Studio in London. THREE HAIRS & YOU'RE MINE is produced by Liam Watson. THE SHRINES grow into an all-star international movement. Their first concert in London is suspended by the police. The band escapes through the back-door. Numerous gigs will follow all across Europe, among others with the demolition dollrods, Mr. Quintron and Ms. Pussycat, an after-party for 50 Cent, even a legendary stint at the Roskilde festival. In 2003 Khan encounters the Hazelwood-producers-team Gordon ?Two Horses? Friedrich and Wolfgang ?Amadeus? Gottlieb, who stage the second longplayer MR. SUPERNATURAL in the beginning of 2004.

INTRODUCING THE SHRINES
Mr. Speedfinger: guitar
Original member of the Shrines. He owns a bar in Kassel and hasn't charged Khan for a drink in five years.

Riddiman: bass
Gypsy-punk and truck-driver. He found his bass in the garbage and plays it up to the very day. Member of the Anarchist-Elektro-Punk-Band EGOTRONIC.

John Boy Adonis: drums
Even though he looks like a bizarre mixture between Jesus Christ and Charlie Manson, no kinship could be proven. Member of the Experimental-Sub-Underground-Band INCLUB EXPLOSIVO.

Ron Streeter: percussion
Percussionist of countless soul-legends. Khan slid a paper with his phone-number under the toilet-door, with one simple plea ?don't wipe your ass with it?. Two days later Ron played with the shrines.

Freddy ?Mr. Ovitch? Rococo: lead organ and piano
Khan had organized a show for the French one-man-band FREDOVITCH. Freddie performed in a silver go-go dress with a matching cowboy-hat and full beard. Two weeks later the shrines had him flown into the London studio.

Sam Fransisco: trumpet
Plays in numerous noise-bands with long artful names. After his girlfriend left him, Sam hurled himself into excessive drug abuse, a circumstance that bestowed a heap of good songs upon the Shrines and musical immortality for himself

Ben Ra: tenor saxophone
Plays in the 60's-Garage-Punk-Band HARAKEEREES. His idols are John Coltrane, Sun Ra and the Sonics. Nevertheless Ben Ra perambulates the universe with his go-go-girl-friend and is easily irritable.

Bid Fred Rollercoaster: baritone saxophone
Plays with the French Trash-Rockabilly-Band BDK & THE ROLLERCOASTERS. Big Fred has got the longest fingers in all of France and has no problem in using them.

The Supreme Genius Of King Khan & The Shrines