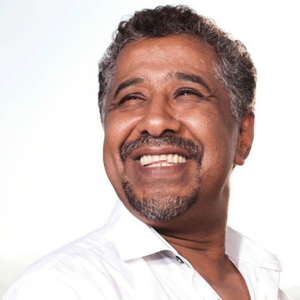 Khaled (aka ???? &, formerly, Cheb Khaled - b. Khaled Hadj Ibrahim / ???? ??? ???????? - Sidi-El-Houari, Algeria - 29 Feb 1960), is a ra? / rai singer-songwriter / multi-instrumentalist. He is a phenomenon in the Arabic world, with a popularity that has reached almost surreal proportions. In 1992 his monster hit single 'Didi' sold over a million copies in European, Arab and Asian countries, and made him more popular than Michael Jackson in India.

This year he was also elevated to the status of nationwide celebrity and ambassador for the Arab minority in France, when his first French-language single, "A&iuml;cha," put his brand of ra? ? a blend of traditional algerian music and more Western styles such as soul, reggae, and rock ? at the top of the French charts for months, and sold 700,000 copies in France alone.