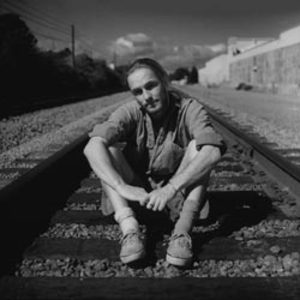 Kent Sparling was born in San Francisco in 1966; he began working with experimental music techniques in 1984, creating unique recordings up to 45 minutes long, using the classic musique concr?te methods of manipulation and montage. With the use of electronic devices and electro-mechanical constructions such as oil drum reverbs and modified speaker systems, he alters the sonic character of a broad range of recorded sounds, from environmental noises, raw electronic sound and natural VLF radio reception, to more traditional "musical" sounds created by familiar instruments.

The result is driftmusic, rich in imagery and emotion.

He has been working since 1996 with Gunnar Madsen, founder of the ? cappella group The Bobs, acting as producer on Gunnar's first solo CD releases, "Spinning World", 13 original waltzes for small ensemble with string quartet, piano, clarinet and bassoon, and "The Power of a Hat" which is a full blown pop album with a live band. He continues his trio collaboration with poet Mark Neville and jazz bassist Ron Crotty on recorded works and live performances. Their "Sounds Familiar" release has been aired on experimental radio programs in Italy, Australia, Canada, Belgium, Russia, Cuba and across the US. Four compositions from his first solo album, "Route Canal Diary", were included in the soundtrack of the Canadian National Film Board documentary "In The Flesh", which aired across North America in early 2000. He has handled the sound duties on "How to Pick Up Girls", and "Transpositional Landscapes" two short films by the Apes of God, "Ripple", a short film by Tim Kerns, "Fear Itself" and "Thirteen Ways" by Dan Weir, and AD Liano's "Three Cornered Hat". He also records and performs with Vanessa Lowe in her band, Bug Eyed Sprite, playing 'tiny instruments': ukulele, melodica and electronics.

KS spent three years as Operations Director at Sound Transform Systems, building Serge, the most advanced modular analog synthesizer currently manufactured in the US. He continues his work in the world of motion pictures as a Re-Recording Mixer at Skywalker Sound, recently on films such as Spike Jonze's "Adaptation", Sofia Coppola's "Lost in Translation" and "Marie Antoinette", Mike Mills' "Thumbsucker", James Gray's "We Own the Night" and "Two Lovers", and Michael Moore's "Sicko". In 2000 he released his second solo album of experimental music, "Under New Manna" and an album of 'orphaned and unfinished works' called "Camphor and Caraway". He released "Leaf Spring" in December 2003 followed by "Evening Air, Freeway Birds, No Wind Birds" and "Indina King" in 2006. In 2007 he composed the original score for Wayne Wang's "Princess of Nebraska", which premiered at the Toronto Film Festival, and in 2008 the original score for Eduardo Sanchez's "Seventh Moon" with Antonio Cora.