Kenny Young and the Eggplants 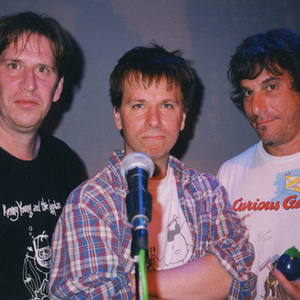 Claiming to be from Brooklyn (but possibly from some other galaxy altogether), Kenny Young and the Eggplants are a not-easily-described semi-acoustic trio who perform songs about giant squirrels, super-powered frogs, scary bits of cheese, inebriated birds, and broken washing machines, among other important rock and roll concerns. Various attempts to define their music have been made, but perhaps the most entertaining quote comes from the New York Times, which said that the Eggplants 'give eloquent voice to the multifaceted neuroses of prolonged adolescence.

Various attempts to define their music have been made, but perhaps the most entertaining quote comes from the New York Times, which said that the Eggplants 'give eloquent voice to the multifaceted neuroses of prolonged adolescence.' In the U.K., the Sunday Herald (Glasgow) said the Eggplants 'mix the wit of Jonathan Richman with the sound of the Nico-era Velvets to create a surreal and satirical gumbo.' They have also been called a 'deeply eccentric pop band' (The Guardian), and 'a wonderful weird band' (The Scotsman). The Village Voice said 'The naivete Kenny wears on his sleeve is genuine - think of an East Village Brian Wilson, without the money but still tilted in his own wacked-out way.'
Overall, the following artists seem to get mentioned the most when people are struggling to describe the Eggplants: They Might Be Giants, Violent Femmes, Jonathan Richman, Frank Zappa.


Perhaps because no one can figure out exactly what the heck they are, the Eggplants get invited to play an intriguing variety of venues. In addition to their gigs at rock clubs and acoustic venues, the Eggplants have played for college audiences, for children, and at science-fiction conventions. They played at BB King's Club on 42nd Street on an evening hosted by Dr. Demento, and they performed on the corner of 132nd Street and 5th Avenue in Harlem during the New York City Marathon. They have performed at elegant British venues like the Royal Festival Hall in London and the Burton Taylor Theatre in Oxford, and at cherished dives like CBGB (NYC), The 100 Club (London), and Bannermans and The Venue (Edinburgh).

The Eggplants frequently stray from their New York vegetable patch to the UK, where there is an apparent need for more songs about 6 foot squirrels. Their tours have included several extended runs at the Edinburgh Fringe Festival, and numerous live BBC radio sessions. They have played in London, Edinburgh, Glasgow, Oxford, Chester, York, Falkirk, East Kilbride, and Bristol, but no matter what the destination, they always seem to get stuck in traffic somewhere around Wolverhampton.

The Eggplants have recorded three CDs on Coney Island Records: Even One is Quite a Few (1996); Toxic Swamp and Other Love Songs (1998); and The Search for Eggplantis or Glam on the Half Shell (2002). Songs from all 3 CDs have been played on hundreds of college and non-commercial radio stations. The long-awaited fourth CD, titled "Arrr!", has just been released by Cheese Thing Records and is currently on the air!

The Eggplants say that the prevailing mood at their shows is 'cheerful chaos.'

Even One Is Quite a Few

The Search for Eggplantis... or Glam on the Half Shell