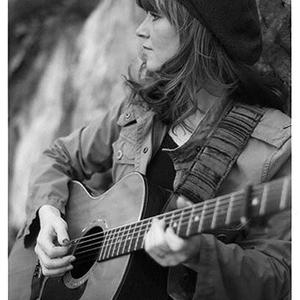 Postmodern folk with a tinge of Americana. If you want to reduce it to an easily digestible phrase, that's what you might call the music of Kelly Flint. As the sultry voice for the trenchant songs of David Cantor in cult faves Dave's True Story, Kelly made five albums and was the toast of the New York Times, the Kennedy Center, and more. But now it's time for her to spread her solo wings, or more appropriately, to DRIVE ALL NIGHT.

That's the title of Flint's first solo album, and what that album's about is the sum total of the places she has been. In the album's warm, organic arrangements, acoustic sonorities, and occasional open-road, real-America flavor, you can discern Flint's Midwestern youth, spent soaking up the classic folk-rockers of the '70s. In the more complex shapes that Flint's lyrics conjure in the mind's eye, and the subtle harmonic twists that keep DRIVE ALL NIGHT from becoming strictly an "Americana" album, her coming of age in New York City is apparent. Her involvement in the jazzy sophistication of Dave's True Story, her immersion in the complicated, urgent, shades-of-gray sensibility that is the experiential dividend of New York life it's all in this striking new batch of songs. Sometimes the trenchant bite is just under the surface, and sometimes it snaps up to nab a piece of your heart. Produced by Jeff Eyrich, bassist and producer for Dave's True Story, DRIVE ALL NIGHT doesn't leave Flint's previous musical life entirely behind; you can still hear the combination of hope and world-weariness, blue moods and gossamer balladry that helped make that group indie darlings. But this album adds another string to Flint's bow, and establishes her as a distinct musical entity, ultimately reliant on nothing but her own artistic road map.