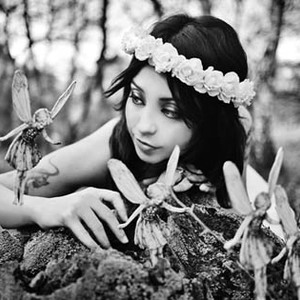 Kelli Ali (b. Kelli Dayton, 30 Jun 1974, in England), is a singer-songwriter, first well known for her distinctive vocals, as lead singer, on Sneaker Pimps' 'Becoming X' / 6 Underground. After her '98 dismissal from the band, Kelli changed her name from Dayton to Ali & embarked on a solo career. In 2000, she signed a recording deal with One Little Indian, to embark on a diverse / adventurous career, in which she's explored numerous genre, in her endeavours to create original songs & music.

In 2009, Kelli recorded and produced her Butterfly album with her partner Metso.
Butterfly is an acoustic album which came about through Kelli's desire to capture the songs from her Rocking Horse album in their metamorphosis as she and her band reworked the songs for the live stage show. This is Kelli's second independent release which is sold through her website and online.

The Tigermouth album includes songs such as ?Sunlight in the Rain? and ?Kids,? which featured ex-Doors drummer John Densmore. Kelli? toured with Garbage in 2003 and released her follow-up album, Psychic Cat, in mid-2004.?
Psychic Cat saw a return to Kelli's electro/rock and roll roots, and featured musician turned author Tony O'Neill on keyboards and Andrew Innes of Primal Scream on the song 'Ideal'.

Kelli's collaborations include her co-writing The Paul Oakenfold (featuring Brittany Murphy) Hit song 'Faster Kill Pussycat', Satoshi Tomiie's 'Up in Flames' and 'Love in Traffic' and Bootsy Collins' 'Play With Bootsy' lead single track from his album 'Play with Bootsy', on which Kelli wrote and sang lead vocals.

After leaving London in 2005 to go traveling around Mexico and California, Kelli began learning to play the acoustic guitar and writing songs for what would become her Rocking Horse album. Inspired by the beauty of nature and her travels, Kelli wrote songs such as 'One Day at a Time' and 'Urique'. Her new vocal approach and sparse arrangements creating the dream folk sound of Rocking Horse.?

Kelli returned to the UK and began recording the Rocking Horse album with Max Richter in Scotland in Spring 2008.?

Marc Pilley played the guitars on the record and Max Richter played the B3 organ and piano, with a quartet playing the string parts and Ruth Morley on flute.

In her live set, Kelli and her band combine cello, flute and acoustic guitar with Kelli's ethereal vocals to interpret the songs from her Rocking Horse album and an original cover of Willows Song from the cult classic Wicker Man film soundtrack.