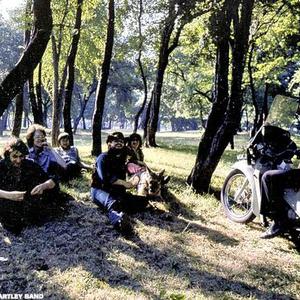 The Keef Hartley (Big) Band was a British jazz-rock band led by Keef Hartley (1944-2011) that mixed elements of jazz, blues, and rock and roll into a jazz-rock sound comparable to Blood, Sweat, and Tears and Chicago. The group played at the legendary Woodstock Festival in 1969. Unfortunately for them they had to follow the blistering set of Santana. As Keef has been quoted, "We had our set list sorted and started with a slow number... and it went downhill from there.

The band released five popular albums, including Halfbreed and The Battle of North West Six (characterised by a reviewer for the Vancouver Sun as "an amazing display of virtuosity")

Keef Hartley (born March 8th, 1944, in Preston, Lancashire, England, died 26 November 2011). He started out as drummer for The Thunderbeats in 1961. Various bands until joining John Mayall in 1967. Bit of session work with Jimi Hendrix in same year. Stayed with John Mayall's Bluesbreakers until 1969 when Mayall decided he no longer needed a drummer. Formed the Keef Harley band releasing The Halfbreed, probably one of the best British Blues/Jazz Blues albums ever. CD discontinued but can be obtained on Universal's CD archive series. For fans of British blues you will find its worth every penny even if it lacks the originals sleeve notes. Vinyl now a real collectors item. Second album ?The Battle of NW6'. Continued with band releasing 5 or more albums, with ever changing line up until recently. Impeccable session list during career with the likes of Martha Velez, Champion Jack Dupree, Jethro Tull, Vinegar Joe, Dana Gillespie, The Michael Chapman Band, Jo Ann Kelly, Stan Webb's Chicken Shack.

//////////////////////Other Bio///////////////////////
Drummer Keef Hartley, a Lancastrian, first caught the public eye when he replaced Ringo Starr in Rory Storm and the Hurricanes. He later moved to London in 1964, drumming first for The Artwoods (with Jon Lord) and then with John Mayall's Bluesbreakers in 1967. The following year, at Mayall's suggestion, Hartley formed his own band. He was a colourful character who often dressed as an American Indian, sometimes complete with head-dress and war paint! This all contributed to the band's popularity in the clubs, and they were one of the few British bands to appear at Woodstock, where they went down quite well. Personnel changes were an ongoing occurrence, but the core of the band was Hartley on drums, Miller Anderson on guitars and vocals, Gary Thain on bass ( later to move to Uriah Heep), Peter Dines on organ, Spit James on second guitar and a large cast of horn and reed players such as Chris Mercer, Henry Lowther and Harry Beckett, to name just a few. In 1971, Hartley formed The Keef Hartley Big Band, with a serious horn section. This line-up recorded the awesome "Little Big Band" at The Marquee Club in 1971. This period of the big band proved to be a very short term venture, mostly due to the conflict between Anderson and Hartley, and Anderson left, having released quite a good solo album, "Bright City", in 1971. ( Anderson and Hartley would later team up in the short lived Dog Soldier in 1975). Our featured album, as well as the final album, "Lancashire Hustler", released in 1973, were essentially solo albums, with the final one being released under Keef Hartley's name as opposed to the Keef Hartley Band. The Keef Hartley Band were, without doubt, next to If and The Alan Bown, amongst England's best brass/rock bands. A new album ( we're not sure if it's an album of new material ( please God!), or if it's a compilation (most probably), called "Not Foolish, not Wise", which was the title of one of their tracks back in the good old days, has recently been released. More info on that as and when we know.

Keef Hartley Band
Keef Hartley Band - Leavin' Trunk, from their debut (and arguably best) album, "Halfbreed", released in 1969. We've covered this great UK brass rock outfit in the past, but just to refresh your memoire...Drummer Keef Hartley first came to prominence when he replaced Ringo Starr in Rory Storm and the Hurricanes. He later featured in The Artwoods (with Jon Lord) before joining John Mayall's Bluesbreakers in 1967. He formed the Keef Hartley Band the following year, at Mayall's suggestion. His oft-changing band initially started out with ex-"The Voice" and "At Last The 1958 Rock 'n Roll Show" guitarist/vocalist Miller Anderson, bassist Gary Thain, second guitarist Spit James and keyboard player Peter Dines. Horns were provided by sax players Lyn Dobson and Chris Mercer( Juicy Lucy) and trumpet players Harry Beckett and Henry Lowther. Our featured album, released on Deram Records, was one of the best brass rock albums of the era, and established a firm fan base for the band that was to be one of a few UK acts to appear at Woodstock. The band went on to release a further five albums, including the excellent "The Time is Near" in 1970. Other well known musicians who appeared with The Keef Hartley Band during their four or so years in existence were Blue Weaver on keyboards, Johnny Almond on sax and Jon Hiseman on drums. Gary Thain would later find fame with Uriah Heep. A seventh album, essentially a Keef Hartley solo album called "Lancashire Hustler", came out in 1973. Oddly enough, this album, which had some really stunning moments, is the only Keef Hartley album that has yet to be released on CD. They really were an excellent band and you'd do well to add a few of their albums to your collection.

The Battle Of North West Six