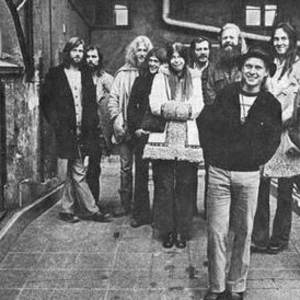 Headed by guitarist Kenny H?kansson, this early 70's Swedish band, named after the highest mountain in Sweden, tried their hands at a number of different styles over the course of six albums, including blues rock, jazz rock, even African music. However, it is for a couple of Scandinavian folk LP's that they are remembered for. By the end of the 70's, and after a slow disintegration of the band, they more or less successfully tried their hands at symphonic rock and then disappeared. Their albums are mostly instrumental.

Their first, a basically blues-rock album, really bears no resemblance to the rest of their r?pertoire. The hiring of six new members after its release proved to be the turning point of their career, as they churned out their two excellent folk prog albums, "Kebnekaise II" and "Kebnekaise III". Both take Swedish folk melodies and rock them up/dress them up with a prog sheen. Often played in minor keys, the violin along with the guitar carries the melody, enlivened with congas, bass and drums plus a few assorted traditional instruments. If not spectacular, the musicianship is fairly good and the material fresh and original, making for an exciting listening experience. By their fourth, fifth and sixth albums, the band had abandoned their folk roots for African music, jazz rock and symphonic rock respectively, none really possessing the charm and allure of numbers II and III. Thankfully, a 1993 compilation CD featuring many interesting tunes from II and III has been released under the title "Electric Mountain".

Fans of Swedish folk prog will definitely get a kick out of KEBNEKAISE II and III.