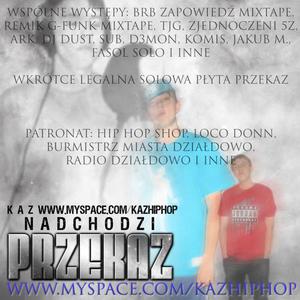 Deriving from the country of Brazil, this unholy demon descended upon the earth and said "yeah 8." then kaz was born. In 1990 ye olde kaz lived ye olde england in the descending middle ages. he slayed many a foe, and started a few side projects and concept albums. his main band "The kazzycore experience" failed with their 1st album "The essentials March 1st 1990-March 27nd 1990." it sold 0 albums, and the residentes of Brazil were outraged with this pathetic filth that landed upon the blasted lands of Braziland, the capital of Brazil.

In 1991, kaz moved on from his complete failure to start a concept band to make a concept album, which led to many concept releases, which then released many concept instruments, concept shirts were also released along with concept stickers. again, brazil was very outraged, and banned kazzycorn from the nation including braziland.
In 1992 kaz wandered the streets of new england, because it seemed to be an england, but new. he began viewing many a bands, and listened to their new sounds and riffs. kaz then began to write new material, released in the underground, which became a MASSIVE failure. so far kaz had sold 0 albums, and was beginning to fall into delusion.
In 1993 kaz was jailed for a DUI offense while walking. he caused a massive human pile up, which killed alot people, maybe even divisible by 8. He then began to write more stuff, but who cares hes in jail.
Kaz was released in 1996 on three years probabtion. he began to write more stuff. man this is getting redundant tell kaz to stop writing stuff. well he learned comptuer stuff and did computer stuff, why ask anymore, quit bothering me man.
In 1997, kaz entered the 8th grade and got 8 out of 8s on stuff, man he was smart. his only downfall was assignments worth more than 8 points, cause he would only get 8 points on them. well sucks for him.
In 1998, kaz did stuff, maybe even died, the end.
In 1999, it was a filler year rather not even write anything about it.
In 2000, kaz caused y2k, to end the worlds electronics, cept his guitar and computer.
In 2006, kaz created a band called conquest, and cody chan joined. they were a failure, and became almost as bad as pheromonia.
In 2007, kaz joined stolen oregano and now is touring cross country. he has millions of dollars in the bank, and has 8 mansions country wide. he is mostly known for his infectious riffs, and his technical solos. mike oregano heads the band as the lead singer and stuff.