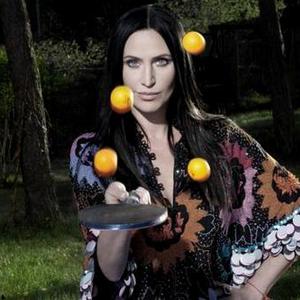 Kayah is a pseudonym of Katarzyna Rooijens (b. Katarzyna Szczot, 5 Nov 1967, in Bia?ystok, Poland), a successful female Polish singer-songwriter. She has released several albums & won numerous awards. At the start of her career, Kayah sang in choirs and with many bands (such as Tilt and Atrakcyjny Kazimierz). She made her solo debut with the song Daughter in 1988 at the Sopot Festival. She released her first, self-produced solo album, Kamien (Stone), in 1996.

She released her first, self-produced solo album, Kamien (Stone), in 1996. It was a great success, consisting of melancholy pop songs. In the same year, she was voted ?Vocalist of the Year' by the Polish music industry and received a Fryderyk in recognition of her achievements.

In 1997, she received another Fryderyk, this time for the album Zebra, in the category of ?Composer of the Year'. With Zebra she changed her style, moving in the direction of American soul music.

In 1999, she recorded one of the most popular Polish albums ever, with the Balkan composer Goran Bregovi?, entitled Kayah & Bregovi?: it is a blend of old Slavic songs and modern rhythms. Most of the music was composed by Bregovi? for the band Bijelo Dugme (White Button), which he had been a part of and movie soundtracks that he had worked on. The lyrics are both translations of the original text and inspired. In the same year she was awarded a Wiktor and another Fryderyk, in the category ?Vocalist of the Year'.

In 2000, she released the album Jaka Ja Kayah which featured pop, jazz, and techno-influenced songs. She also released the single "Aniol Wiedzial" ("The Angel Knew") from the album, duetted with Cesaria Evora in Portuguese, and recorded English-language versions of some of her songs.