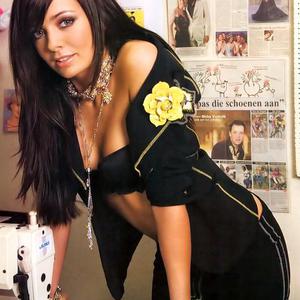 Katerine Avgoustakis is a solo singer and was the winner of the 2005 Star Academy show in Belgium, similar to American Idol in the United States. Avgoustakis was born on September 16, 1983, to a Greek father and a Belgian mother, who passed away in 2005, at 54 years old, after a long struggle with liver cancer. She plays the piano and used to be in a choir. Katerine Avgoustakis made her singing debut as a member of the band Indiana in 2002, with whom she participated with in the national final to represent Belgium in the Eurovision Song Contest 2002 with the song "Imitation Love".

Katerine Avgoustakis made her singing debut as a member of the band Indiana in 2002, with whom she participated with in the national final to represent Belgium in the Eurovision Song Contest 2002 with the song "Imitation Love". Indiana failed to make it through the selection's semi-final round.

After leaving Indiana, she entered Star Academy in Flanders in 2005. She worked her way to the finale and won the contest and a record contract with Universal Music Belgium. Avgoustakis's debut single "New Day", released in July 2005 in Belgium, peaked at #2 in the Belgian UltraTop 50 chart. "New Day" was written and produced by Regi Penxten & Filip Vandueren, the team behind Milk Inc. Three months later, she received the TMF Flanders award for Best New National Artist for the song. Also the song was certified gold in Belgium. Her self-named debut album Katerine was released on November 14, 2005 in Belgium. The album is to be released in May in the Netherlands. Due the 'unexpected' sudden death of her mother, her second single, Here Come All the Boys, was delayed to be released in October 2005. This is the first single she also released in the Netherlands, that peaked at #89 in the Dutch Mega Singles Top 100. The song is also featured on the hits compilation HitBox, which was released on March 13, 2006, containing hits like Ricky Martin's I Don't Care, Rihanna's If It's Lovin' That You Want and the Michael Jackson cover Say Say Say (Waiting 4 U) by Hi_Tack.

Katerine also won the first Belgian pre-selection for Eurosong 2006 on January 8, 2006 with the song "Watch Me Move". Because of this, she was sure to have a place in the pre-finale rounds, however the judges thought her voice wasn't powerful enough to win.

The third single from her album Katerine, "Take Me Home", was released on April 4, 2006 in Belgium, with "Watch Me Move" as B-side. The next single "Catfight" was a quick follow-up and both "Take Me Home" and "Catfight" had very strong videos.

In 2007, Katerine was asked for the Belgian TV Program "Sterren op het Ijs" (a Belgian version of Stars on Ice), an opportunity she gladly accepted. She even made it to the final, but came in second. After Dean Delannoit, the Winner of 'Idol 2007' of that year.

In May 2007, she released "Live Wire", the first single from her upcoming second album and the song's music video was her first 'computer animated' video. A couple of months later she released "Don't Put It on Me" and then she and her Record Label reached a 'hiatus' and wanted to go in different directions which they did. Avgoustakis soon agreed to a new recording contract with Mostiko, which led to the single "Shut Your Mouth", with music different from her normal sounds. The single fared well in the charts charting in its first week at number three in the 'Ultratop 50'. In the following months, she released three more singles: "He's Not Like You", "Upon The Catwalk" (soundtrack from "Topmodel", a Belgian tv program) and "Ultrasonic". Ultrasonic even made it in the Canada Dance Charts on the 2nd place! All these singles (also including Live Wire and Don't Put It On Me) appear on her second studio album, "Overdrive", which was released in late November / early December, and was another disappiontment in sales, not being able to debut or chart in the UltraTop 50, despite positive reviews.

Avgoustakis and Mostiko have been approached by several international labels over the last months that showed interest in her new album for which negotiations are in progress to release internationally. Avgoustakis said in an interview that an international career "would be fabulous" and that she is "currently negotiating with [...] contact persons in Greece and [that] there have been releases in Spain, South Africa and Poland. [They] also got positive reactions from the Scandinavian countries, Russia and Japan".