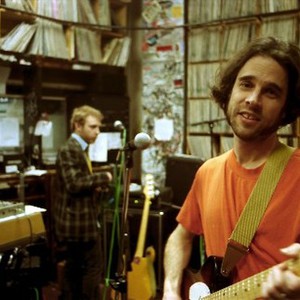 BIO: Long-time midwesterner Thomas Comerford started Kaspar Hauser while living in Iowa City in 1999. Though he'd played guitar, written songs and played in bands since the age of ten, with influences ranging from the Beatles to the Meat Puppets to Will Oldham, his only releases were hand-held tape recordings handed out to friends. Upon moving to Chicago in 1999, he began to assemble various lineups to do sporadic shows and recordings.

Kaspar Hauser was still a part-time activity, however, as Comerford (who teaches film at the School of the Art Institute of Chicago) was producing 16mm films and touring the country with them.

While working on the Quixotic/Taxidermy record between 2004-6, Comerford began to devote more time to songwriting, recording and performing music. In making the record, he drew on a number of friends and previous contributors, including Stephen ?the kid? Howard (Pinebender, Ambulette), Johnathan Crawford (ex-Head of Femur, William Elliot Whitmore) and Kent Lambert (Roommate), among others. Kris Poulin, a Chicago engineer (Pinback, Bonnie ?Prince' Billy, Love Story in Blood Red) who has recorded and played with Comerford over the years, recorded and mixed the bulk of the record, which came out in 2007 to excellent reviews and airplay on college radio stations. With a new live lineup, including Chicago musicians Steve Kiraly (Reagan National Crash Diet) and Matt Seifert (SCool Devices, Phantom Works), the band played shows in Chicago and the US throughout 2007-8.


2009:
Recording and mixing over the course of 2008, Kaspar Hauser completed its new record, The Sons. On Friday, 20 February 2009, KH released the record with a live show at the Beat Kitchen in Chicago with Jon Langford (his Skull Orchard band) and the Judy Green. They went on to play a number of shows behind the record in Chicago and around the mid-west.

2010-11:
Across 2009, Comerford wrote enough material to begin a solo recording project, which he recorded sporadically with friends while touring with and screening his experimental documentary, The Indian Boundary Line (2010). The resulting 8-song record, entitled Archive + Spiral, features Chicago musicians Seth Vanek (Roommate), Justin Petertil (Love Raid), Ed Crouse and Gregg Ostrom, and will be issued by Spacesuit Records in October 2011.

Kaspar Hauser celebrated ten years of live performance in July 2010 with a show at Quenchers Saloon in Chicago, featuring guest appearances by Kent Lambert, Stephen "the Kid" Howard, among others, and sets by Chicago bands Psychic Friends, Last Cannibal, Stanley Ross as well as North Dakotans, June Panic and June Panic's Wife. The band, whose lineup now includes John Roeser (Innkeepers) on bass guitar, has continued to develop new material, and plans to record a full length record before the end of the year.

The Tin Can Gong