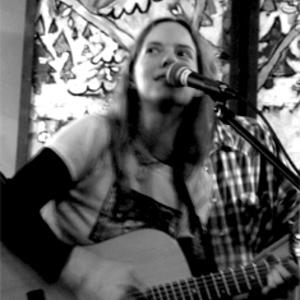 History Kasey Rausch was born in Parkville, Missouri, but grew up in Livingston, Texas. She lived in a musically inclined household, and was encouraged by her parents at a young age to take up the acoustic guitar. She had several adventures as a budding young musician, but her talent and inspiration really began to blossom after she moved to Kansas City, Missouri in the early 90's, where she encountered Mikal Shapiro.

The two music-makers (as she refers to herself) hit it off well, and a lifelong friendship ensued. Their first efforts together were as a duo (and periodic ensemble, later on) named Mama Ra. Currently, Kasey makes plenty of music in the tri-state region surrounding Kansas City Missouri, and can be found touring and playing most weekends.
(Check her schedule out here.)