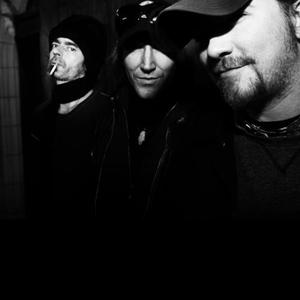 Karma to Burn is an American instrumental stoner rock band. The band was formed in 1994, in Hicksville, West Virginia (actually Morgantown, West Virginia, though this was a running joke also reflected in bios of the band on other Web sites). The band is currently located in Los Angeles. Their instrumental album Almost Heathen is widely regarded as on par Kyuss' Welcome to Sky Valley and Monster Magnet's Spine of God, as one of the defining albums of the stoner rock genre, although the band themselves referred to their style as malternative.

Their instrumental album Almost Heathen is widely regarded as on par Kyuss' Welcome to Sky Valley and Monster Magnet's Spine of God, as one of the defining albums of the stoner rock genre, although the band themselves referred to their style as malternative.

The band was renown for their live performances and former Kyuss singer John Garcia was a big fan and even tried to sing with the band, however this didn't bear much fruit as he did not have the time to become a full-time member and Karma to Burn itself wasn't sure his voice fitted in their music.

Karma To Burn refused to give their songs ordinary titles, instead referring to them by numbers, which allegedly made it easier for a dyslexic band member to read setlists.

The group quietly disbanded in 2002 after bassist Rich Mullins left to play full time in Speedealer.

On February 23, 2009, Karma to Burn reformed with the line-up being the same as when they disbanded. A year after reuniting, Karma To Burn released a fourth full length album on April 1, 2010, Appalachian Incantation, which was produced by Scott Reeder formerly of the stoner rock band Kyuss. Like their previous two releases, this is an instrumental album, though one track does feature Year Long Disaster's Daniel Davies on vocals.
In June 2010, Year Long Disaster toured Europe with all three members of Karma To Burn as part of the band. The favour was returned on Karma To Burn's European summer tour, with Davies stepping in as an occasional guitarist (and, when needed, vocalist) for the band.
The follow-up to Appalachian Incantation was recorded in February, 2011, at Dave Grohl's studio, and includes Davies' vocals on three songs, although he has since started a project outside Karma to Burn and left the group, returning the band to a trio. This album has been released and is titled V.

"This ain't no movie soundtrack chump. It's real life and these are real songs by real people. Four people to be exact. They hail from some small town in West Virginia. A town they'd rather not have me mention here because of what I'm about to tell you. Karma To Burn got their start as drug addled teenagers listening to Skynyrd. In an opiated world, fantasies can appear so real. These boys in the hillbilly state wanted to be rock stars. They bought instruments. Built a still in the back yard. Tried to make music and moonshine. The moonshine sucked but the supersonic rumblings sounded good to them. They saw through the blurred vision to a light at the end of the tunnel. After three months, a plan was concocted. They made a tape but had no singer. Fuck it. Instrumentals it was to be. Heavy as shit and loud as hell. With no singer and subsequently no lyrics, songs were given numbers as their meager titles. They sent the tape out to labels. With tactics Howard Stern would applaud, they called labels impersonating other bands spewing what the world will soon find out about...the madness and mayhem of Karma To Burn. They played a show in NYC and inked a deal with Roadrunner Records. Large room service bills were rung up. Per diem money disappeared. Things were moving along like a train...like their music. They decided to get a singer. Various people tried out. They returned from the land o' the lost with horror stories. Karma to Burn was Marlon Brando the singers were Martin Sheen. This was a rock and roll version of Apocalypse Now. One fellow who tried out ended up in the looney bin. No one could make the cut. So they enlisted one of their friends. He can't really sing. His sound is more of a distorted warble. He moans and grunts a lot. Due to his dyslexia, they had to name their songs because he sucked at numbers and kept fucking up. So it was to be that their songs would have titles. Titles like "(Waltz Of The) Playboy Pallbearers", "Appalachian Woman", "Mt. Penetrator", and "Twin Sisters and a Half Bottle of Bourbon". Finally they made it into the studio. What you have in your hands is the debut record from Dickey, William, Baka, and Nicholas collectively known as Karma To Burn. This ain't no movie soundtrack. It's a record about real life in rural America. It's a record about dreams. It's about sex, drugs, and - you guessed it - rock and roll. The trinity is now complete. Thanks for your time. Now fuck off and die." was written by Wiebke, former European Press Agent.

It should be noted that RR actually "enforced" K2B to hire a vocalist. ;)