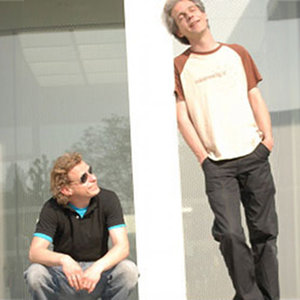 1) A German downtempo/dnb duo: Lars Dorsch & Tom Dams, which made its first release in 1995. Lars was a founder of the Groove Attack Record-Shop (Cologne, Germany), one of the largest in the country. From mid-90s, onwards, they moved away from a hip-hop focus, toward other sub-genre in the breakbeat spectrum, i.e. drum n bass, trip-hop, big beat, downbeat. At the time, there was a groundswell of breakbeat artists in southern Germany, but too few record labels / distribution co.s to partner with. Using their contacts, with veteran hip-hop artists, they created the Groove Attack recording & distribution label.

As a drum-n-bass / downbeat DJ, Lars tried his hand at production & teamed up with former house DJ Mojo - forming the producer/DJ combo 'Karma' . The Spectrum Works label was set-up to handle their output (the first Groove Attack sub-label).

2) A 'heavy metal' band, from Cairo, Egypt (formed 2006). The original line up was Mahmoud Barakat as the drummer, Ragy Akram handling vocals, Ehab Sami as the lead Guitarist, Mohamed Haggan Rhythm Guitarist and Karim Mounir on The Bass. The Band's First appearance was on 2-07-2007 at El-Sawy Culture wheel, where they received appraisable comments. But After the concert the original Rhythm Guitarist M. Haggan left the band and was followed shortly by the departure of Ehab Sami (Lead Guitarist). In 14-04-2008 the band returned for their Second apperance with the new members; Omar haridy (Lead Guitarist), Sherif Anees (Rhythm Guitarist) and Sherif Mostafa (Keyboards) at El-Sawy Culture wheel. Few days later they preformed at the A.U.C Battle of the bands and won the title. Finally in September, 2008 they started recording their first single "Can't let go". Later on sheif anees left the band and Ehab Sami returned back to hit the road with karma again .. In 11 - 2009 They Released Their First Album Called ( Actions In Previous Existence )

3) A Romanian folk band (formed 1992, as Simbioze. Soon after formation the band changed its name to Karma. They have released three albums to date (C?nd lumina va veni, Sfinte c?ntece-nghe?ate and Fii Amurgului) and they have also won numerous local and national folk contests.

5) South African award winning singer/songwriter Karma-Ann Swanepoel said farewell to her homeland and adoring fans late November 2003. The celebrated pop chanteuse and former lead singer of HENRY ATE made the move to America to pursue her dream of accessing and introducing her work to a larger audience.

An Indie pop-rock artist, equipped with phenomenal talent, addictive songs and an uncanny ability to captivate every listener. Her sound is reminiscent of Suzanne Vega and Natalie Merchant infused with the pop friendliness of The Cranberries. Without a doubt KARMA's most powerful quality is the blatant heartache instilled into her writing and performances ? an attribute that has won her the accolade of 1 wordsmith in her homeland.

She is an unsigned artist, exploiting every opportunity and means of self-promotion available to her. She has exceeded 10 000 CD sales independently via her website and at live shows, has been featured on over 200 podcasts internationally, had her album DON'T WALK FLY reviewed and praised in over 50 international publications and built a substantial following and mailing list of adoring fans locally and internationally.

She is currently on tour promoting her 2008 release ?even if She tried? co-produced John D. Thomas (Lauryn Hill, Scott Stapp (Creed), P.Diddy, Prince, Missy Elliot, Jamie Foxx). The full length album called ?The Riddle? is scheduled for release in July 2008.

6) A rock band, from Sao Paulo, Brazil, blending the complexity of prog rock & aggression of heavy metal. They were formed, in 1998, by Chico Dehira, Marcell Cardoso & Tiago Bianchi - all students from Sao Paulo's music university. Fabrizio di Sarno (keyboards) and Felipe Andreoli (bass) soon completed the line-up. Their d?but album Inside the Eyes (Oct 2000, on Siegen Records). Karma also contributed to the Queensr&yuml;che tribute album Warning: Minds of Raging Empires with their rendition of I Am I.

8) Karma (Washington, DC USA)
Karma started in 2001 when sixteen year old Zac Ciulla began recording his own music on a cassette tape machine. He has released two albums under the moniker on his own label, Applecore Records. Website is at http://www.myspace.com/karmarock

9) The Finnish country rock band Karma is mostly known for their 1976 hit "Hyv?? huomenta, Suomi" (a Finnish cover of City of New Orleans) that still enjoys widespread recognition. The band was active from 1972 to the 1980s.

12) The dance movement in Croatia has grown intensively the last few years. The band Karma is reaching for the throne, and is well on its way in doing that.

Karma is from the city of Umag, in the province of Istria (northwest coast of Croatia).
Officially the band was founded in 1999, although Neno and Pipi already worked together since 1993. Influenced by the (nearby) Italian outgoing scene, their music could be described as electronica similar to Gigi D'Agostino, Scooter, Sash, Mollele and bands like Eiffel 65.

DJ Neno is both a fan of and expert in dance music. Neno has been working as a professional DJ over the last 15 years, travelling across Europe searching for the best possible sounds and styles ? a pure trend watcher.
Pipi gained experience in the music industry as a keyboard player. With his previous band he travelled all over Europe. He can be considered a walking jukebox; playing classical music, pop and rock hits, evergreens ? you name it. Pipi's idols are Jean Michel Jarre, Vangelis, Kraftwerk and Enigma.

The last piece of the puzzle was a singer for the band. After many troubles finding one, they ran into Mirela Zemcak, a former piano teacher whose voice fit well with the band's sound. Soon afterwards Mirela started to write lyrics for the band, and the band had to recruit a new singer. In 2000 Tara was already singing professionally for two years, and fit perfectly into Karma. As a result of that, a deal was signed with Menart.

The first single from their debut album Sedam dana was ?Reci mi ne'. The song was well received by clubs, radio DJ's and fans of dance parties. A few weeks before the release of the album, Karma performed the song ?Sedam dana' at the Split festival. The song received an ?best arrangement' award. This positive feedback gave Karma energy to continue their good work.

14) At The age of 15 Steven Wilson was in a teenaged progressive rock band called Karma, who played live around Hertfordshire and recorded two cassette albums, The Joke's On You (1983) and The Last Man To Laugh (1985). These contained early versions of "Small Fish", "Nine Cats" and "The Joke's On You", which were subsequently resurrected as Porcupine Tree songs.

Even If She Tried