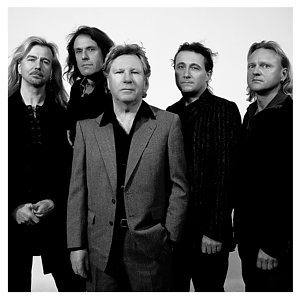 Karat, also known as K...! (from January 2006 to June 2007), is a German rock band, founded in Berlin in what was then East Germany in 1975. One of East Germany's best-known bands, Karat were also popular outside the GDR, with their most notable success their 1982 album Der blaue Planet (The Blue Planet), which was one of the year's top sellers in West Germany. "?ber sieben Br?cken mu?t du geh'n" (You Must Cross Seven Bridges), is the band's best-known song...

"?ber sieben Br?cken mu?t du geh'n" (You Must Cross Seven Bridges), is the band's best-known song, and helped introduce Karat to audiences outside East Germany, thanks to West German singer Peter Maffay, who recorded a cover version of it that became a massive hit for him in 1980.

The 1982 album Der blaue Planet sold more than 1.3 million copies, propelled by its uptempo, radio-friendly title track about the dangers of nuclear and environmental cataclysm; the song is still frequently heard on German radio. Der blaue Planet became not only Karat's best-selling record, but the biggest-selling album of any East German artist, inside or outside the country. In 1984, the band were honored with the National Prize of East Germany.