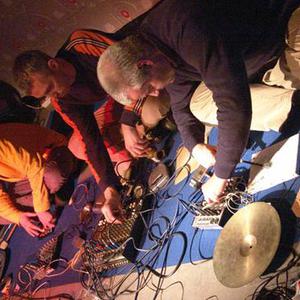 Kapotte Muziek was founded in 1984 by Frans de Waard, then living in Nijmegen, The Netherlands. Soon he was joined by Christian Nijs, who also lived in Nijmegen. They did not actually play together, though: Christian would record all the sounds at home on cassettes and give them to Frans, who would manipulate the material in different ways (pitch-change, loops, etc.). This way of working (using 'second-hand' material and recycling it endlessly) became the core of the activities of Kapotte Muziek.

In 1987 Christian left the project in favour of playing rock-music in a real band. His farewell to industrial music was marked with a memorable Kapotte Muziek concert (the second Kapotte Muziek live concert) in V2 in Den Bosch, The Netherlands.
Until 1993 Frans continued the project on his own, inviting as many musicians as he knew to send in material to be recycled. This resulted in collaborations with groups like SBOTHI, Merzbow, De Fabriek, Yeast Culture, Odal, Asmus Tietchens and many others. For example, with Merzbow a collaboration concert was performed live on an illegal radio station in Nijmegen. Gradually, the harsh territory of industrial music was left behind and other forms of electro-acoustic music were explored.

In early 1993, plans to do a US tour resulted in a close collaboration with Peter Duimelinks (member of another Dutch electro-acoustic collective, THU20). The 16 dates, in places ranging from small clubs to shops and a radio station were so successful, that it was decided to continue playing live. In May 1995, a third member, Roel Meelkop (also from THU20) joined and they played several live concerts in Europe (The Netherlands, Germany, Italy , Belgium and the Czech Republic). As a result of this, the 3" mini CD 'ADD' was released on Staalplaat, Amsterdam. At the same time, Kapotte Muziek still exists as a studio-project of Frans de Waard.

During live performances Kapotte Muziek explores the minimum input of acoustic sound to a maximum extent. All sounds originate from obsolete materials that we have found in the course of our activities. Every performance is preceded by a 'junk search' to obtain new sound material. In the past we have used metal (from very small to very big), wood, paper, plastic, glass, stones etc. Every object is thoroughly explored for its sound qualities, amplified either by microphone or by contact-microphone. This is combined live with pre-recorded sounds of acoustic, environmental and electronic origin.