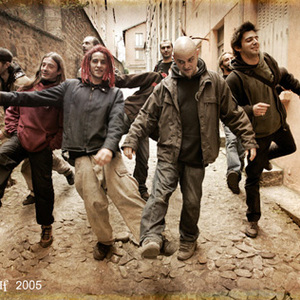 Kaly Live Dub is an electro-dub music band formed in the year 1995 at Lyon, France. Paul Kozmik (Pilah) : guitar Eric Frascone (Five Keys) : bass St?phane Bernard (Uzul) : samplers machines Mathieu 'Mat' Trouillet : drum and programming Thibault Louis : keyboards In the begining, the name of the band was ?Kaly Calipso? and plays dub roots with a strong reggae influence such as Jamaicans bands of the 70's. The band then forges an important reputation in concerts (what will justify name of ?Live?) during three years before to release a first demo, Orange Dub, in 1998.

The following year, the brass session stops its activity with the band, the singer moves to the samplers machine and a new drumer replaces Dominique Peter left to play with High Tone. Kaly starts to practise a novo dub style and a new maxi 4 tracks is published under the name 1.4Khz. Kaly Live Dub was born.
Electric Kool Aid, the 1st Cd album of the band is released in year 2000. The album attracts by its important choice of samples which will make the characteristic of this band.
Almost in the same time, Kaly Live Dub proposes another maxi with the Jamaican singer Rod Taylor. Follows two new years of live concerts through France.
Also Pilah, the guitar player, creates the collective Dub Addict Sound System to multiply the musical meetings and to diffuse dubplates like the old Jamaicans Sound-Systems.
In year 2003, an album and 3 maxis are published by the band.
With the second album, heading Hydrophonic, the band goes thoroughly into his own style and confirms his musical diversities. The tracks are tinted by Eastern sonorities and admit some jungle part.
The maxi-cd, the Encounter 2: Maxidrumix, proposes 4 tracks from the first album remixed by High Tone, Jah Warrior, Push and Crystal Distortion.
Lastly, Kaly records with High Tone at the end of the year. From this meeting 4 tracks are published under the name ?Kaltone?.
Follows the reissue of the first 3 maxis in one digi-pack accompanied by some new titles, 3 Maximal Overdubs. The birth of the side-project, Hybrid Sound System, which develops a more electronic dub music and drum'n'bass oriented. And a long live tour during all the year 2004.
A third album is published in 2005. This time Kaly Live Dub proposes a powerful and psychedelic dub hybrid interfering by many samples of traditional African, Berber and Indian music.
At the beginning of the year 2007 is published a live album composed by a Cd and a DVD and in two different versions. In this album collaborates the trumpet player Erik Truffaz for 2 very planing Trip-Hop-Smooth jazz tracks, ?How To Be Late? and ?Curieux?.